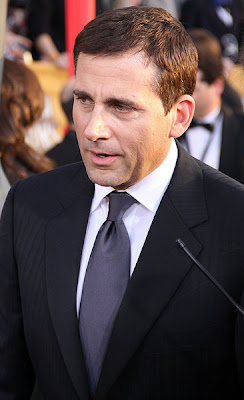 I just watched Superbad for the first time, and while I thought it was decent, and pretty funny in the final analysis, it was hard work to get through.  I struggle with awkward and embarrassing movies, especially of the Judd Apatow formula: completely charmless, pathetic male protagonists that bumble through the movie making complete asses out of themselves.  Or, at least, a movie like that has to be leavened with a great deal of silliness for me to be able to enjoy it (like the police sub-plot in Superbad).  I thought Talladega Nights struck a good balance in this regard.

I'm not sure exactly why it is I have such a reaction to such movies, but it's an extraordinarily powerful one.  It's a visceral physical discomfort.  If the movie is sufficiently awkward, I literally cannot watch.  I had to turn off Old School.  The idea behind that kind of humor seems to be a kind of release from fear—watching someone else humiliate himself as a celebration of freedom from such humiliation (at that moment, anyway).  My taste leans more toward the absurd (like Monty Python), where the jokes have no victim; or satire, where the victims genuinely deserve to be humiliated.  Perhaps as a somewhat awkward person myself I too easily sympathize with Apatow's protagonists.  Watching such movies, I am certainly reminded of my own numerous abject failures.

But it's more than that, I suspect.  Though I'm no social savant, I am not quite fit to star in an Apatow film.  High school was not a particularly hard time for me.  I was never bullied, had plenty of friends, and reasonable success with girls.  It might just be too much sympathy for the underdog.  Whatever the reason, it's got a strong grip.