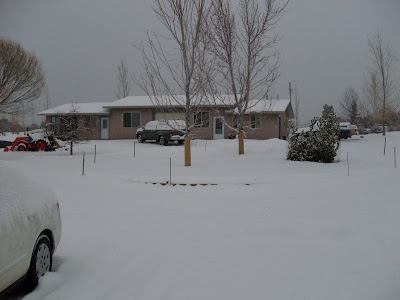 I've collected a few simpler articles on the crisis. Check this one in the Washington Post, this one about the foreclosure that started it all, and this one about a Florida man (to be mentioned later). As usual, Paul Krugman has the clearest explanation:

The story so far: An epic housing bust and sustained high unemployment have led to an epidemic of default, with millions of homeowners falling behind on mortgage payments. So servicers — the companies that collect payments on behalf of mortgage owners — have been foreclosing on many mortgages, seizing many homes.

But do they actually have the right to seize these homes? Horror stories have been proliferating, like the case of the Florida man whose home was taken even though he had no mortgage. More significantly, certain players have been ignoring the law. Courts have been approving foreclosures without requiring that mortgage servicers produce appropriate documentation; instead, they have relied on affidavits asserting that the papers are in order. And these affidavits were often produced by “robo-signers,” or low-level employees who had no idea whether their assertions were true.

Now an awful truth is becoming apparent: In many cases, the documentation doesn’t exist. In the frenzy of the bubble, much home lending was undertaken by fly-by-night companies trying to generate as much volume as possible. These loans were sold off to mortgage “trusts,” which, in turn, sliced and diced them into mortgage-backed securities. The trusts were legally required to obtain and hold the mortgage notes that specified the borrowers’ obligations. But it’s now apparent that such niceties were frequently neglected. And this means that many of the foreclosures now taking place are, in fact, illegal.

Emphasis mine. When I started hearing about this, my first thought was that, well, at least my parents own their house free and clear, but the case of this Florida man surprised even me. (He will get his house back, but only because he notified the local media. My parents' properties are likely in no danger.) Unwinding this crisis in a just fashion is probably not going to happen, but here's hoping. As Krugman says, Obama, like political elites of both parties generally, will protect the financial sector first and foremost.

Beyond the specifics, this is a reason why I would be homeless before I'd be an financial employee of any kind. I trust businessmen in general very little, but I see the basic legitimacy of a company like, say, Wal-Mart. Government must restrain its worst impulses, but it is not wholly evil. There exists a correspondence between the interest of an average person (to buy cheap things) and the interest of the company (to sell cheap things).

I see no such basic legitimacy in the financial sector. Banking is a necessary function for a modern economy, but as Atrios says Wall Street is "...a giant casino industry with a side gig in banking, and that banking side gig has meant the government will always guarantee the house bets." The first response of the banksters to the massive problem with foreclosures has been, yet again, to pump the smallest and most helpless among us as hard as they can, laws be damned. They can't help themselves. The financial sector as a system is thoroughly stupid and evil, and the first assumption for any sensible regulatory regime should be that bankers will make the cruelest and dumbest decisions that can be imagined, decisions that will in the medium term crush both the helpless and themselves.

I think too often many of us have tried to come up with elaborate financial/economic rationalizations for why the banksters have approached all of this the way they have. The simpler explanation is that they're sociopathic assholes who think that everyone else must suffer for their mistakes. It doesn't necessarily have anything to do with their companies' bottom lines. Remember, they already destroyed their companies once.