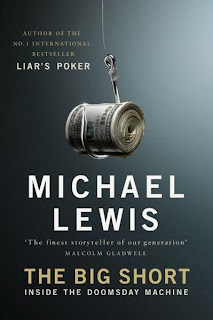 Summary: this work is by far the best thing I have read on the financial crisis.  Highly recommended.

Up today: The Big Short, by Michael Lewis.  He takes a situation caused mainly by obscure and complex financial derivatives and makes it not just intelligible but fascinating.  He follows around most of the people that saw the crisis in the financial sector coming (as opposed to the housing bubble, which a somewhat larger number grasped but was more obvious).  His style is appropriate, down-to-earth and often sarcastic and cutting: "The Big Wall Street firms, seemingly so shrewd and self-interested, had somehow become the dumb money.  The people who ran them did not understand their own business, and their regulators obviously knew even less."  His subjects have similarly jaded outlooks.  One of them, a man named Steve Eisman:


The second company for which Eisman was given sole responsibility was called Lomas Financial Corp. Lomas had just emerged from bankruptcy. "I put a sell rating on the thing because it was a piece of shit. I didn't know that you weren't supposed to put sell ratings on companies. I thought there were three boxes — buy, hold, sell — and you could pick the one you thought you should." [...]

"The single greatest line I ever wrote as an analyst," says Eisman, "was after Lomas said they were hedged." He recited the line from memory: "'The Lomas Financial Corporation is a perfectly hedged financial institution: it loses money in every conceivable interest rate environment.' I enjoyed writing that sentence more than any sentence I ever wrote." A few months after he published that line, the Lomas Financial Corporation returned to bankruptcy.

The causes of the financial crisis are hard to summarize, but basically Wall Street invented new ways of making financial products, mostly bonds, out of subprime mortgages that obscured their actual risk, and proceeded to make more derivatives out of these derivatives.  (They gave them obscurantist acronyms like ABS: asset-backed security, MBS: mortgage-backed security, and finally CDO: collateralized debt obligation.  The last one was the catch-all where some were derivatives of derivatives of derivatives, or other such insanity.)  The ratings agencies, in an unforgivable dereliction of duty, did not even really glance at what these bonds were made of and slapped AAA ratings—the same as US Treasury bonds—on most of them.  Then they came up with a new form of really stupid insurance on these bonds (known as the CDS: credit default swap) which allowed the risk from the bonds to infect other markets and be multiplied a hundredfold—and then made even more derivatives out of the insurance policies.  This bond machine created a huge demand for subprime mortgages, helping to inflate the housing bubble.  When it popped, all the bonds went to crap, and all the insurance came due at once, and the taxpayers paid these chumps $700 billion to avoid another Great Depression.

All this was basically fraud, if not legally then morally, but a further element is necessary to fully explain the crisis: stupidity.  Howie Hubler, a trader for Morgan Stanley, shorted the subprime market but then, for some short-term profits, sold CDSs on $16 billion of CDOs.  When he resigned in 2007 he had personally lost $9 billion, the "single largest trading loss in the history of Wall Street."  The big banks were cynical and amoral enough to come up with these things, but too stupid to realize the implications of what they would eventually do—namely, crush everyone including themselves.  Where to go from here in a difficult question.  The banks have managed to loose themselves enough to recreate the financial cataclysms of the Gilded Age, but also own the government so thoroughly that they will immediately receive bailouts in a crisis without having to make any meaningful reforms.  I don't think we've seen the last of this type of crisis by any means—indeed, we haven't yet unwound the last one.

Lewis does spend a little too much time on his protagonists, analyzing their lives and problems thoroughly, and not enough looking into the roots of the crisis—not the immediate causes, but the conditions that allowed those causes to unfold.  He does look at that a little in his afterword, but not in much detail.  Clearly the incentives are all wrong—even Howie Hubler went home with a huge pile of money.  But how do we fix it permanently?  Perhaps a subject for a later work.