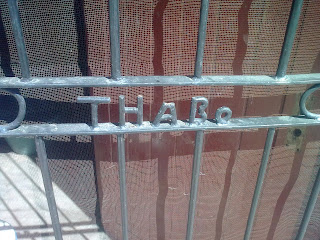 Kristen has an interesting topic that I don't believe I've mentioned yet: the Setswana name most of us receive, along with the associated barrel of nicknames. Mine is "Thabo," (pronounced TAH-bo) which linguistically speaking comes from the Nguni (Zulu, Xhosa, etc.) family of languages, I believe, but has migrated around all South Africa. It is extremely common everywhere—South Africa's illustrious former president had it, though I'll bet he didn't have it emblazoned on his burglar bars. It means "happiness."

There are lots of nicknames: T-bos, Thabs, Thabi, etc. None as hilarious as Kristen's, though. One that isn't really a nickname but I don't like is baas, which is Afrikaans for "boss," and carries distinct racial undertones. I try to squelch that when I can but it does pop up now and again.