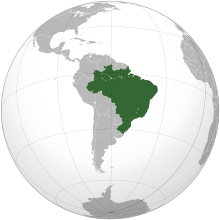 Brazil's continuing fitful emergence as South America's first great power of modern times has highlighted some of the similarities it shares with South Africa. They are both massively unequal in terms of income and have daunting crime problems. Brazil's crime is somewhat less of a problem (the homicide rate is 25% less overall, 30 vs. 40 per 100,000), but some of the inner cities have war zone levels of murder. Maceió's rate, for example, is above 104. Brazil has a disturbing history of racial oppression, and some have called the current inequality problem "social apartheid." (For my part, I think that probably confuses the issue more than anything else, and is mostly an attempt to brand the Brazilian government with the moral stigma of the Apartheid regime.)

In any case, education seems plagued by many of the same problems as here:

Over the past decade, Brazil’s students have scored among the lowest of any country’s students taking international exams for basic skills like reading, mathematics and science, trailing fellow Latin American nations like Chile, Uruguay and Mexico.

Brazilian 15-year-olds tied for 49th out of 56 countries on the reading exam of the Program for International Student Assessment, with more than half scoring in the test’s bottom reading level in 2006, the most recent year available. In math and science, they fared even worse.

“We should be ashamed of ourselves,” said Ilona Becskeházy, executive director of the Lemann Foundation, an organization based in São Paulo devoted to improving Brazilian education. “This means that 15-year-olds in Brazil are mastering more or less the same skills as 9-year-olds or 10-year-olds in countries such as Denmark or Finland.” [...]

The urgency could hardly be clearer. Brazil has already established itself as a global force, riding a commodity and domestic consumption boom to become one of the largest economies in the world. With huge new oil discoveries and an increasingly important role in providing food and raw materials to China, the country is poised to surge even more.

But the nation’s educational shortcomings are leaving many Brazilians on the sidelines. More than 22 percent of the roughly 25 million workers available to join Brazil’s work force this year were not considered qualified to meet the demands of the labor market, according to a government report in March.

“In certain cities and states we have a problem hiring workers, even though we do have employment,” said Márcio Pochmann, president of the Institute for Applied Economic Research, the government agency that produced the March report. Earlier estimates showed that tens of thousands of jobs went unclaimed because there were not enough qualified professionals to fill them.

This is classic South Africa. One section of the economy is highly developed with a large demand for skilled workers. Meanwhile, there is a large mass of uneducated low-skilled workers, and an education system that is failing to produce the skilled workers needed. The regional power is being crushed on standardized tests by less-developed neighbors. One major difference, however, is that Brazil's economy has remained diverse enough to employ most of those un- or low-skilled people. Unemployment in Brazil is around 7.3%, while in South Africa it is closer to 25%.

(On a side note, South Africa's and Brazil's situation is structural unemployment. I got in an argument with another volunteer here some time ago; she said that "Obama's new entitlement programs" had doomed the USA to 10% unemployment in perpetuity "just like in Europe." Putting aside the fact that "Europe" does not universally have 10% unemployment and that the new health care bill (about the only entitlement adjustment) mostly doesn't take effect until 2014, this is simply wrong. She was claiming structural, permanent unemployment because of all those people now too lazy to look for jobs, but that situation is illustrated above—a large unemployed population, but some industries that simply can't find the workers they need. The USA, on the other had, is facing a classic bout of cyclical unemployment, a shortfall in aggregate demand, a recession, where practically every industry takes a nosedive at once.)

On the face of things, I feel more optimism for Brazil than for South Africa. Despite the failure of the education system, they still manage to employ a very respectable percentage of the population. They've become a gigantic food exporter in the last 30 years. Crime is high, but stable and dropping slowly. The political system is stable and not overwhelmingly dominated by one party. So long as they focus on the basics for education (e.g. reading, writing, and maths) and don't try and run before they crawl, things should continue to improve.