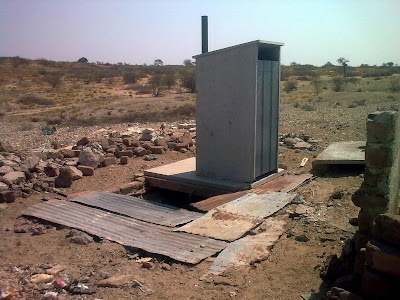 Here you can see my new pit toilet. The old one was one of the positive things I listed during my brief attempt to think positive last October. Well, that thing finally filled up, and this was placed on top of a conveniently extant hole that used to be some kind of basement or cellar, so far as I can tell. They just cleaned out the hole, wrenched the old enclosure off the previous toilet, and suspended it over the hole. I have to give credit to my host brother, who since he mostly recovered from his AIDS/TB nadir has proven quite handy around the place. (I spent some time in the hospital with him a while back, maybe I can wrestle that experience into a post someday.) My host mother hired some men to dig another hole next to the old toilet, but they mostly just drank and gave out after about 4.5 feet.

Though the hole probably isn't deep enough to satisfy the building code (guffaw), it's way more than wide enough, as you can see. This should give it enough volume to last to the end of my service. I'm just hoping we can extend that covering to the rest of the hole so one of the local drunks doesn't pitch down there some bleary Sunday.