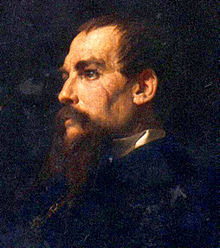 I've been writing a bit of fiction while this strike drags on. It's a kind of exploration story, and some research led me to this crazy guy:

Captain Sir Richard Francis Burton KCMG FRGS (19 March 1821 – 20 October 1890) was an English explorer, translator, writer, soldier, orientalist, ethnologist, linguist, poet, hypnotist, fencer and diplomat. He was known for his travels and explorations within Asia and Africa as well as his extraordinary knowledge of languages and cultures. According to one count, he spoke 29 European, Asian, and African languages.

Burton's best-known achievements include travelling in disguise to Mecca, an unexpurgated translation of One Thousand and One Nights (also commonly called The Arabian Nights in English after Andrew Lang's abridgement), bringing the Kama Sutra to publication in English, and journeying with John Hanning Speke as the first Europeans led by Africa's greatest explorer guide, Sidi Mubarak Bombay, utilizing route information by Indian and Omani merchants who traded in the region, to visit the Great Lakes of Africa in search of the source of the Nile. Burton extensively criticized colonial policies (to the detriment of his career) in his works and letters.

...he prepared to set out for the interior accompanied by Lieutenant Speke, Lieutenant G. E. Herne and Lieutenant William Stroyan and a number of Africans employed as bearers. However, before the expedition was able to leave camp, his party was attacked by a group of Somali waranle ("warriors"). The officers estimated the number of attackers at 200. In the ensuing fight, Stroyan was killed and Speke was captured and wounded in eleven places before he managed to escape. Burton was impaled with a javelin, the point entering one cheek and exiting the other. This wound left a notable scar that can be easily seen on portraits and photographs. He was forced to make his escape with the weapon still transfixing his head. [...]

Burton's writings are unusually open and frank about his interest in sex and sexuality. His travel writing is often full of details about the sexual lives of the inhabitants of areas he travelled through. Burton's interest in sexuality led him to make measurements of the lengths of the sexual organs of male inhabitants of various regions which he includes in his travel books. He also describes sexual techniques common in the regions he visited, often hinting that he had participated, hence breaking both sexual and racial taboos of his day.

Almost gives you hope for the world. Here you can find every book he ever wrote for free.