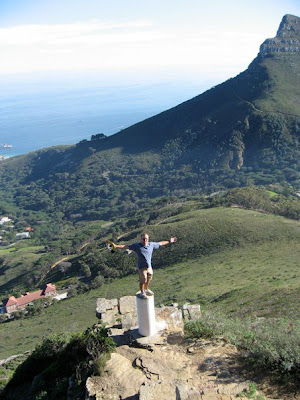 A few things have been stewing in my mind for the last few weeks since June. The World Cup trip was splendid, definitely ranking among my top five best vacations ever. It was rather the opposite from my trip to Eastern Cape last December, where we stayed in one place for nine days. This time we were booking it around South Africa at top speed, only staying at places for a day or two. Edward Abbey always railed against the road trip vacation, but there are things to commend about both methods.

The whirlwind tour version, though I often wished to stay and explore, gave me a new feeling for South Africa, a better sense of the grandeur and scale of the place than I had gotten heretofore. Also I was struck by the jarring difference between different biomes--from the skeletal spare desert south of Namibia to the Mediterranean wine country in northern Western Cape to the organized, safe and temperate Cape Town. From the stark, drenched Tsitsikamma and Port Elizabeth to the warm sun of Durban to the bitter cold of the winter Drakensburg. From the high riot of Johannesburg to the constrained wildness of Kruger to the cool fog of the winter highveld outside Nelspruit. A land of contrast, as my father would say.