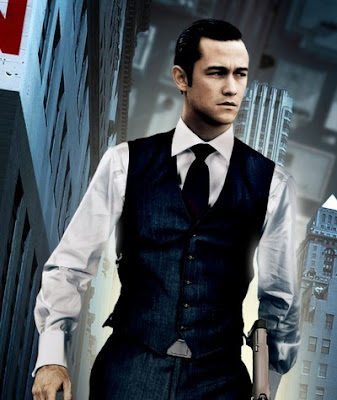 Summary: this mind-bender from Christopher Nolan was flawed but ultimately excellent.

I just returned from a trip to Kimberley to check out this flick, which I'm proud to say I watched twice. I think the first thing that must be mentioned about this movie is that it is cool. It exudes cool more than anything I can remember since Brad Pitt in Fight Club. The score, style, cinematography, editing, set and costume design all blended seamlessly. Perhaps the best example of this is Joseph Gordon-Levitt's character, who rocks a waistcoat better than anyone since the reign of Queen Elizabeth.

The plot is intricate but mostly solid. It's about a man (DiCaprio) whose trade is stealing ideas from people's minds while they dream. He shares lucid dreams with a team of people who break into someone's mind to either steal their secrets or trick them into revealing them; this is called extraction. Inception is planting an idea in the target's mind, as opposed to stealing one. There are a few logical holes here and there, but especially as the pace picked up to blinding speed in the second and third acts they could mostly be forgiven.

I did have a few complaints. There were the aforementioned logical holes. The first act drags a little bit. There were a few too many action movie tropes, like highly trained assassins who can't shoot for shit. It's a little too serious, and the writing a little clunky in spots. The dreams seem not quite weird enough—who wouldn't give themselves the ability to fly in "raw, infinite subconscious?" I suspect this has something to do with Nolan both writing and directing. Many parts were thought out extremely well, while others seemed neglected. Another mind or two working out the rough edges in the concept might have helped some.

But overall, I have to give Nolan major props for even attempting something this ambitious and succeeding as much as he did. The directing was excellent. This is Hollywood at its best: a giant, well-done entertainment with enough interesting ideas at its core to spawn some decent discussion. Much better than Avatar.

UPDATE: Another irritation I forgot. At one point they hire a chemist who is supposed to be able to design a custom sedative that leaves inner ear function unimpaired (psychopharm buffs: do normal sedatives actually shut down inner ear function?), and the dude's office consists of a bunch of dusty bottles filled up with murky amber fluid. No chromatography columns, no FT-IR, no gas chromatograph-mass spectrometer, no NMR, not even a dang round-bottomed flask. I doubt that would bother most people though.