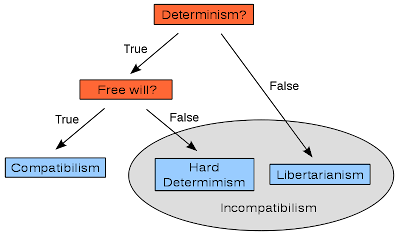 This post is dedicated to Mark Bedau, my philosophy professor at Reed, a great guy and a wonderful teacher, by far the least pretentious philosopher I've ever met. He is responsible for this post only insofar as he sparked my interest in the subject; its many shortcomings are mine alone.

Who's ready for some unqualified philosophical rambling? I'm not going to do much more than summarize, as this is probably one of the five biggest problems in philosophy and the material quickly gets out of hand. Anyway—let's start with some terms, appropriately hefty philosophical ones. (I'm going to steal shamelessly from Wikipedia, as the free will article is very good.) Free will is "purported ability of agents to make choices free from constraints." Some call it the "ability to have done otherwise," but that definition runs into problems which I'll describe later. Determinism is the view that all events are caused by previous events, while indeterminism is the opposite. Incompatibilism holds that free will and determinism are mutually exclusive, and is divided into two camps, metaphysical libertarianism (free will = true) and hard determinism (determinism = true). Compatibilism holds that both determinism and free will are true.

On a side note, it's worth mentioning that determinism is false in a technical sense. Consider the view that, with sufficient knowledge (see Laplace's Demon), events can be predicted exactly. Quantum mechanics, by introducing a fundamental statistical nature to reality, measurable on very small scales, invalidated this view. Combined with the extreme sensitivity to of chaotic systems to initial conditions, this quantum indeterminacy might make large events fundamentally unpredictable. In any case, that has little to do with free will. As J.J.C. Smart said, "Indeterminism does not confer freedom on us: I would feel that my freedom was impaired if I thought that a quantum mechanical trigger in my brain might cause me to leap into the garden and eat a slug."

Early compatibilists like Thomas Hobbes argued that determinism was orthogonal to free will. What matters is that individual choices were not forced by external factors of some kind, as in the commission of a crime. "To be a compatibilist, one need not endorse any particular conception of free will, but only deny that determinism is at odds with free will." More recent compatibilists have bitten the determinist bullet and tried to show that sometimes even totally determined events can be the result of free will. (Take the example of a person Jones in a room about to choose between A and B. In another room Brown has a mysterious apparatus that can compel Jones to choose A if he looks like he's going to go for B. Jones in fact chooses A, making the machine unnecessary. He made the choice of his own free will, but could not have chosen otherwise.)

A lot of the problems of free will turn on the idea of the agent—trying to figure out just how a person acts in the world. I suspect personally that Egginton is right when he says a lot of the framing around the whole argument has led us astray:

In one set of experiments, researchers attached sensors to the parts of monkeys’ brains responsible for visual pattern recognition. The monkeys were then taught to respond to a cue by choosing to look at one of two patterns. Computers reading the sensors were able to register the decision a fraction of a second before the monkeys’ eyes turned to the pattern. As the monkeys were not deliberating, but rather reacting to visual stimuli, researchers were able to plausibly claim that the computer could successfully predict the monkeys’ reaction. In other words, the computer was reading the monkeys’ minds and knew before they did what their decision would be.

Imagine we suspend a steel ball from a magnet directly above a vertical steel plate, such that when I turn off the magnet, the ball hits the edge of the plate and falls to either one side or the other.

Very few people, having accepted the premises of this experiment, would conclude from its outcome that the ball in question was exhibiting free will. Whether the ball falls on one side or the other of the steel plate, we can all comfortably agree, is completely determined by the physical forces acting on the ball, which are simply too complex and minute for us to monitor. And yet we have no problem assuming the opposite to be true of the application of the monkey experiment to theoretical humans: namely, that 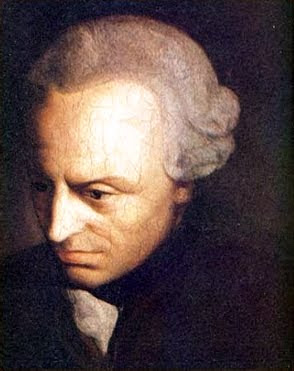 because their actions are predictable they can be assumed to lack free will. In other words, we have no reason to assume that either predictability or lack of predictability has anything to say about free will. The fact that we do make this association has more to do with the model of the world that we subtly import into such thought experiments than with the experiments themselves.

The model in question holds that the universe exists in space and time as a kind of ultimate code that can be deciphered. This image of the universe has a philosophical and religious provenance, and has made its way into secular beliefs and practices as well. In the case of human freedom, this presumption of a “code of codes” works by convincing us that a prediction somehow decodes or deciphers a future that already exists in a coded form. So, for example, when the computers read the signals coming from the monkeys’ brains and make a prediction, belief in the code of codes influences how we interpret that event. Instead of interpreting the prediction as what it is — a statement about the neural process leading to the monkeys’ actions — we extrapolate about a supposed future as if it were already written down, and all we were doing was reading it.

I've barely scratched the surface here, but I'd like to finish by touching on a few compelling subjects I haven't looked into as much as I'd like to. Neuroscience and psychology have some interesting results, but I'm not at all certain how to interpret them. I'm also interested in emergence ("the way complex systems and patterns arise out of a multiplicity of relatively simple interactions") and how that interacts with neurological theories. Consider the number of possible games of Go, with simple deterministic rules, and the number of neurons in the human brain.