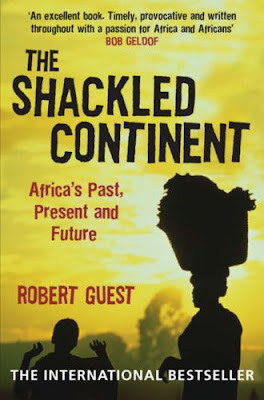 Summary: this work from Economist writer Robert Guest contains a lot of the kind of free trade leg-humping one would expect. However his diagnosis of the current problems and the best probable solutions (drawn in very broad strokes) are fairly convincing.

This book purports to answer three separate but related questions: what are the problems facing Sub-Saharan Africa (hereafter referred to as Africa)? why does this area have so many problems? and what are the best solutions?

The answer to the second question is totally inadequate. Guest insists that colonialism is not the issue. He points to South Korea, which went from a post-colonial basketcase to a first-rank power in about fifty years, while most of Africa continued to languish in the dumps. He instead proposes that Africa has terrible leadership: inefficient, statist, corrupt, cronyist governments that provide an almost insurmountable barrier for anyone looking to start a business. Well, yeah. But why is the leadership so bad? It's just a coincidence that the most backward continent is also the one that was stomped into the dirt for 500 years? Guest mostly glosses over the fact of the Soviet Union providing real support for colonial victims, thus planting a few of the seeds of the statism he bemoans today, and doesn't adequately discuss racism or slavery.

But if you set those complaints aside, the rest of the book is pretty good. His account of riding around with a truckload of Guiness in Cameroon is particularly good. His proposal for solving these problems, basic free market sorts of solutions, are mostly reasonable. I've read a few critiques of this book (tracking with similar attacks on neoliberal economics generally) saying that "free trade" is just an thinly veiled program for convincing poor countries to liberalize their markets so heavily subsidized western companies can flood those markets with underpriced products. As far as neoliberalism goes, think that's largely true, but shouldn't be read as a problem with free trade itself. In theory, it should cut both ways, and USA corn subsidies are just as indefensible (or more so) than African tariffs. But Guest mostly avoids this problem, as he does go both ways—in addition to mentioning poor countries' tariffs, he also mentions the ridiculous subsidies rich countries tend to give their agricultural industries, which actively suppress those industries in poor countries.

One last thing: awhile back in a post on aid, I rather glibly said:

I think international aid is an area where well-intentioned people can do a lot of nothing (or even harm) by poorly thought-out donations. Obviously aid to governments is the worst offender, often skimmed by corrupt bureaucrats or warlords. I think aid to underdeveloped governments could stop tomorrow and there would be no great loss.

I learned from this book that the economy of Botswana, the most developed in Africa, was kick-started by international loans. So clearly such loans are not always bad; one just has to be careful who is getting the money and what uses it is going towards.