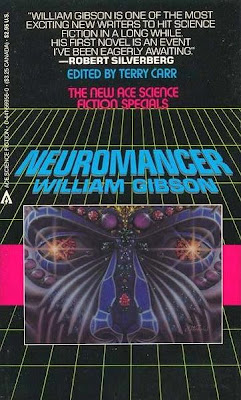 Up today: Neuromancer by William Gibson. Summary: this seminal text in the cyberpunk genre remains excellent but a bit of research is necessary to really appreciate its originality.

I've been hitting the science fiction hard lately, I realize. Actually, during our world cup trip I read a half-dozen normal books but haven't felt inclined to lay down my thoughts. But I make no apologies; I still agree with Kurt Vonnegut: "It seemed to me that science fiction writers were writing about the most important issues of our time, and that the mainstream writers and those most respected by critics were still dealing with the subtleties of human character and motivation and all that. Meanwhile, we've created these monstrous engines and social schemes and so forth which are having more influence on us than anything else. So I created Kilgore Trout to say 'maybe these guys can't write so well, but they're sure talking about what needs to be talked about.'"

Anyway, this is a weird book to read, because you have to be constantly correcting yourself about things that sound dated but in fact were revolutionary at the time. For example, Gibson invented the word "cyberspace." He used "matrix" in the computer sense for the first time (though calling a neural implant a "microsoft" didn't catch on). Basically he laid the groundwork of the cyberpunk genre and spawned dozens of imitators, so it's a bit rewarding to take a step back and consider just how stunningly original he was.

The book follows Case, a interface cowboy (computer hacker) who is adrift in the Japanese underworld. He previously tried to steal from his employer and they crippled his computer talent with designer toxins. He's hired by a man called Armitage, who offers to fix Case's damaged brain and another job as a cowboy. Armitage also has a woman named Molly working for him as hired muscle. Together Molly and Case discover that behind Armitage is a shadowy figure called Wintermute. Action ensues.

The writing and the plotting are exceptionally good. It's got a planed-down noir feel to it that works well, and the eventual resolution of the plot is well done. There are a few weaknesses, like some Rastafarians who help Case that are frankly ridiculous. The character development is thin at best.

But overall, it definitely earned its reputation. Highly recommended.