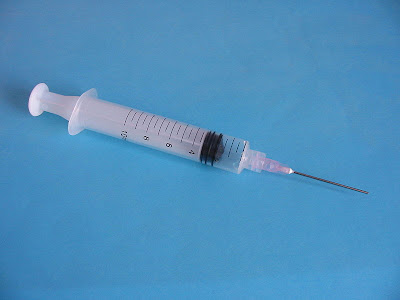 The only thing that gives me hope that the US will be able to get a handle on the health care crisis is that so many of the problems are, well, head-spinningly stupid:

Deadly yet easily preventable bloodstream infections continue to plague American hospitals because facility administrators fail to commit resources and attention to the problem, according to a survey of medical professionals released Monday.

An estimated 80,000 patients per year develop catheter-related bloodstream infections, or CRBSIs -- which can occur when tubes that are inserted into a vein to monitor blood flow or deliver medication and nutrients are improperly prepared or left in longer than necessary. About 30,000 patients die as a result, according to the Centers for Disease Control and Prevention, accounting for nearly a third of annual deaths from hospital-acquired infections in the United States.

Yet evidence suggests hospital workers could all but eliminate CRBSIs by following a five-step checklist that is stunningly basic: (1) Wash hands with soap; (2) clean patient's skin with an effective antiseptic; (3) put sterile drapes over the entire patient; (4) wear a sterile mask, hat, gown and gloves; (5) put a sterile dressing over the catheter site.

A related story concerns Thomas Shaw, the inventor of a syringe with a retractable needle that also cuts infections:

After months of trial and error, Shaw hit on the idea of surrounding the tip of the syringe with six petal-like flanges, which could flare open to make way for the catheter port. Unlike some of the solutions floated by big medical device makers, such as coating the ports with silver, Shaw’s innovation added only a few pennies to the cost of production. And it seemed to be remarkably effective: a 2007 clinical study funded by Shaw’s company and conducted by the independent SGS Laboratories found the device prevented germs from being transferred to catheters nearly 100 percent of the time.

Given these facts, you might expect that hospitals would be lining up to buy Shaw’s product. But that is not the case, even though his company is offering to match whatever price medical facilities are paying for their current, infection-prone IV catheter syringes. In fact, since the device hit the market two years ago, Retractable has sold fewer than 20,000 units, mostly to one New York hospital. Often, the company’s sales team can’t even get in the door to show their wares to purchasing agents. “The product does exactly what it is supposed to do,” Shaw says. “But it has one fatal flaw. Right there at the bottom of the handle it says Retractable Technologies.”

Apparently the supply of medical devices is dominated by a few giant cartels that effectively lock hospitals into giant suppliers and make it basically impossible for small inventors to get their products into hospitals.

A cursory examination of the growth of health care costs shows that without change eventually the US will be strangled by it. Obamacare was a small first step, not sufficient by itself to correct the problem. Some of the succeeding steps will be challenging, but there is a tremendous amount of deadwood out there enriching the useless and killing people, with solutions (in a technical sense) obvious to a child. Let's hope we can muster the ovaries to get it done.