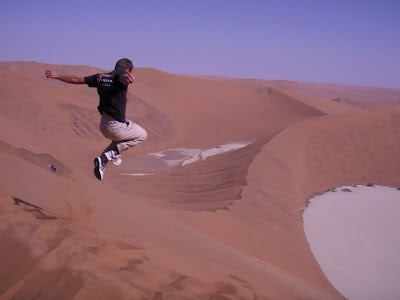 Fun facts: Namibia is the second-least densely populated country in the world (behind Mongolia, and if you don't count Greenland and some others as colonies). Namibia was also part of South Africa from 1920 to 1990, administered as a de-facto fifth province.

Anyway, we started our trip by meeting up in Upington. There was a bit of a fiasco when I went with Noah to pick up our rental car in Kimberley (due apparently to my poor line of credit), but after some desperate pleading and signing a couple minor organs away as collateral, we managed to scrape through with Noah's card.

The next day we got right to it, descending into the Fish River Canyon which was pretty close to as spectacular as advertised. I heard from several people that it's the second-largest canyon in the world (which seems like a rather difficult thing to measure), 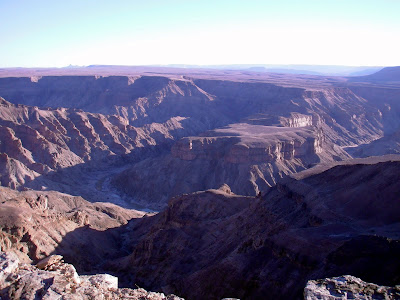 but to me it seemed comparable to some smaller US canyons like the San Juan, and quite a bit smaller than the Grand Canyon. It cuts down through a lot of igneous and metamorphic rock, so you don't see the layer-cake effect quite as much as in the Southwest.

Nevertheless, it's a spectacular canyon and made for an amazing (if rather blistery) hike. One jarring difference with US canyons is that the Fish River basically dries up in the wintertime. With no mountains to provide a little runoff during the dry season, it was a bare trickle down there in between large pools. Yet the high water mark was way up the canyon walls, at 100,000+ cfs at least. Namibia is bloody enormous and the Fish River drains about half of it. I'd be interested to see if anyone has run it before while the rains are going. The gradient was very steep, especially at the top; I'd imagine it'd be pretty gnarly. 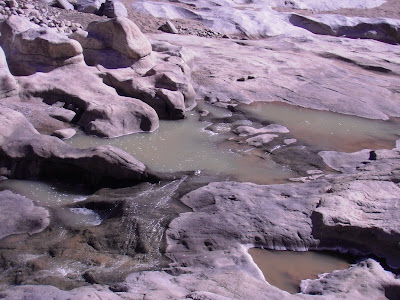 Not as large as some rivers.

Another difference I noticed was the constant beaches. Most of the beach sand in US river systems is currently collecting heavy metals in a reservoir somewhere. 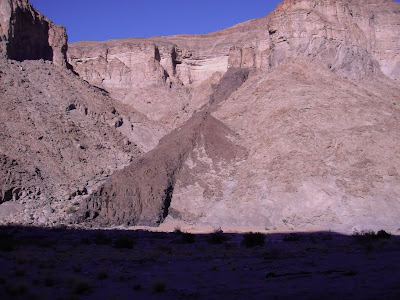 Here we had some great camping on the dunes but had to empty our shoes out several times per day. I was reminded of some of the research trips my Dad has been doing recently. Speaking of my family, I was also missing my geologist sister something fierce--some of the formations down there were bizarre. We saw numerous vertical intrusions of some black stuff I assumed (for lack of any other guesses) was basalt.

On the second day we had a relaxing soak in Palm Springs, which came out of the wall at a scalding 57 C. It was rather challenging hiking, actually, and we needed the break. There were many sections of deep sand or precarious scrambling over large rocks. I was thankful for all the childhood practice jumping around on boulders. Later, the canyon opened up a bit and it got a little easier. 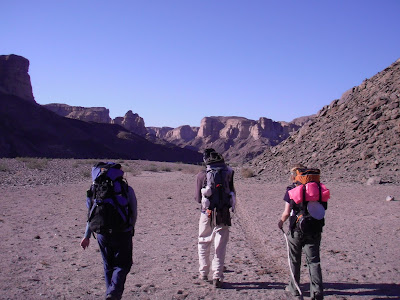 All in all, though we did get a bit lost once trying to take a shortcut, it was a beautiful hike, definitely worth the pain inflicted on my feet. After we finished up we stayed a night at the Ai-Ais resort and drove to the Sossusvlei area, site of the highest sand dunes in the world. We did have some mechanical troubles, but luckily Kristen was there to rescue us. 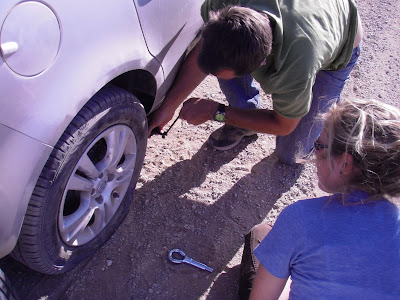 Sometimes I miss my truck. 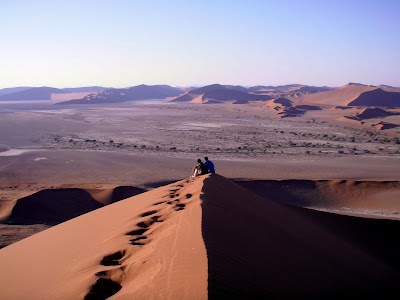 The Sossusvlei area is supposedly the biggest tourist attraction in Namibia. The main point in the "Big Daddy" dune, allegedly the tallest in the world. Half our group climbed to the top in the company of an excellent Belgian couple on their honeymoon (who were unreasonably nice to us), which took about an hour and a half, then sprinted down the face, which took about two minutes. (The first picture of this post was taken from near the top.) Big Daddy is right next to an eerie place called the "Dead Vlei." (Vlei means "pan" in Afrikaans.) It features some dried husks of camelthorn trees that have been there for 900 years. Their roots apparently go down some forty meters.

Now it's time to get back to work. Ugh. 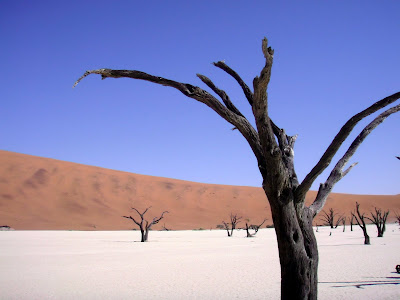