Is the Daily Show sexist? 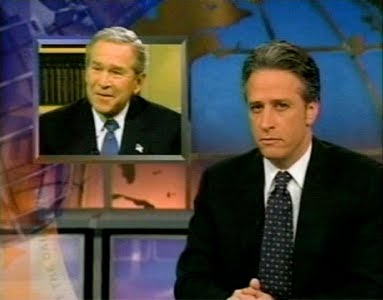 A few days back, after the tryout of former video-game host Olivia Munn, Jezebel posted an indictment of The Daily Show:

The Daily Show is many things: progressive darling, alleged news source for America's youth, righteous media critique. And it's also a boys' club where women's contributions are often ignored and dismissed.

The show responded with this letter from women staffers:

The Daily Show isn't a place where women quietly suffer on the sidelines as barely tolerated tokens. On the contrary: just like the men here, we're indispensable. We generate a significant portion of the show's creative content and the fact is, it wouldn't be the show that you love without us.

It's tough to know what to make of this. Comedy is, indisputably, a male-dominated profession. Take a look at Comedy Central's list of the 100 best comedians--by my count, eight of them are women. And according to Jezebel, Munn is only the second female correspondent in seven years at TDS, and guests this year have been 63 males and 13 females.

I think Coates is mostly on the right track:

I think I'm more swayed by Smithburg's explanation, probably because it's akin to what I've experienced in magazine journalism and its seemingly unshakeable whiteness. There is a very direct correlation between the wealth gap and the diversity of masthead at magazines like this one. Us black and Latinos often come from backgrounds in which our families' primary reason for sending us off to college is stability.

I think that last point likely applies to women in comedy. I suspect that a certain kind of cultural capital--a kind that women are often not privy to--is really at work here. The problem is the accumulation of said capital, as Smithburg indicates, begins long before one is at a point in their career where employment at The Daily Show is a possibility.

None of this is meant to condone throwing up one's hands and feigning powerlessness. But by the time you're debating Olivia Munn, it's already too late. Better to begin by, say, setting up a summer program for girls in their junior or senior year of high school, and try to foster that needed cultural capital. The Daily Show may already have a program like that, I don't know. But this points to something else--these kinds of societal problems require root work, and there's no guarantee you'll get any credit for doing it. But if the point is to show the world how nonsexist you are, you've already failed. It has to go deeper.

And also, I think Amanda Marcotte is probably on to something:

I'd say the whole problem is actually quite simple. Our culture does believe there are female and a male senses of humor that differ. We tend to say that men have a sense of humor when they say funny things, and that women have a sense of humor when they know when best to laugh when men say funny things. This sense is so ingrained that I had a few occasions when I was younger where I'd say something funny and get blank stares, only to find a man stealing my joke a half hour later and getting giant belly laughs for it.

That doesn't happen to me anymore, because once you get paid a couple times to write funny stuff, people start to put you into the category of exceptional, funny women who get to join that boy's club. But even then, I suspect the reason it's so hard for comedy shows to remember to hire women is that we have trouble recognizing jokes for what they are when they come out of female mouths.

Jon Stewart is no sexist. But I'll admit, grudgingly, that TDS is probably (like the rest of the comedy industry) rather sexist in practice. They should be taking more steps (as they have with their racially diverse correspondents) to seed and recruit female talent.

I was still rather irritated by the Jezebel article and a lot of the hullabaloo that ensued. Let me explain why: one of the things I like about South Africa is the refreshingly candid discussions I've had about race and other taboo subjects--the relative lack of PC police that makes people so much more guarded in the USA. American discourse around race, gender, and sexual orientation is such a minefield that many people simply avoid it altogether--better to avoid making a friendship- or career-destroying gaffe.

I don't want to come across as yet another white male complaining that I can't make racist and sexist jokes. I'm not saying that someone like Rush Limbaugh should be given the benefit of the doubt--political correctness has eliminated a lot of prejudice from the national discourse, or at least made it a lost more problematic. Nor am I saying that people shouldn't speak out or condemn practices or people they see as immoral. But this kind of moralizing--where good faith goes out the window, where demons are condemned and exorcised--often makes it harder to have an honest conversation with people who are fundamentally on the same side. It makes for defensiveness and counterattack rather than soul searching.