Feel it: it is gone 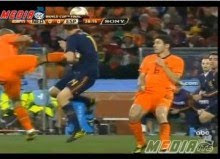 Well, that went by pretty quick. We're already feeling post-World Cup hangover as what was helping prop up the economy and distracting everyone from the intractable problems ground to a halt. Last night I watched the final with my host family wrapped in my sleeping bag as the temperature plummeted to near-freezing yesterday. I have to agree with Becca's sentiments here:

As the world cup comes to an end this weekend, it's a bit hard to process. It seems like the World Cup has been omnipresent in South Africa's consciousness since long before we arrived in the country so it will be a bit weird to go on without it.

The final itself was a little underwhelming--all the semifinals and especially the third place match were far better soccer. There were some atrocious fouls, particularly from the Dutch. I was amazed the De Jong's karate kick into Xavi Alonso's chest didn't end up with a red card. Still, the better team won, and on a very impressive goal, not PKs. That alone puts it above the 2006 final with the infamous headbutt and PKs (admittedly a low bar).

"2010! Ke Nako! Feel it!" have been the phrases on everyone's tongues since we arrived. It will be interesting to see how the country handles the transition. The crime fears of UK tabloids proved unfounded; crime actually went down. The sheer quantities of tourists probably provided some safety in numbers, but the decisive factor had to be the stupendous police presence--even Kuruman had cops galore.

Private security companies said violent crime in parts of Johannesburg fell 60%. Some believe criminal gangs took a kind of forced sabbatical to avoid the 40,000 extra police hired for the tournament.

Perhaps someone can work those data into their theory of crime prevention. (Mark Kleiman?)

Maybe (ok, definitely) crime will creep back up, some of the stadiums will be destroyed, and about one-fourth of South Africans will remain chronically unemployed. But there's no way the 2010 FIFA World Cup can be considered anything but a resounding success. I was privileged to be a part of it, and feel nothing but immense pride for South Africa.