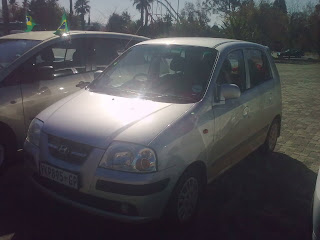 This was our rental car. It's a Hyundai Atos, which means "shoebox" in korean if I'm not mistaken. When I left we had put nearly 7000 km on the thing. Clocking in at a whopping 58 horsepower, we hit first gear a few times going up hills.

The puzzling thing to me was that it didn't even get very good gas milage. After numerous conversions, we figured it to get about 36 miles per gallon or so. I remember my mom's 2003 Honda Accord, with 160 horsepower and about twice the space, could easily get over 40 mpg.

The issue, I think, is that a car so underpowered actually becomes less efficient. Maintaining road speed with such a tiny engine makes you wind it up so much it's on a lousy place on the torque curve. About the only advantage is that they have to be dirt cheap to make.