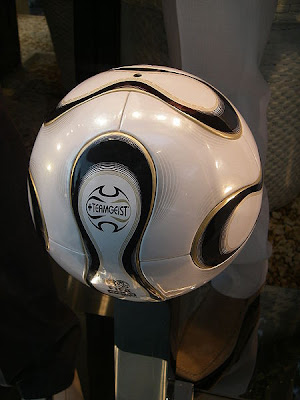 The folks from the Kalahari Experience left a few sports balls here when they left. There were three soccer balls, a basketball, three volleyballs, and a rugby ball. The only one left is the rugby ball (because they don't play rugby). Every other one has been destroyed; in fact, they lasted about two weeks total. I was a bit stunned when I found the shredded remains of a soccer ball on the way back from a run the other day.

I thought back to the days when I used to play--I was never anywhere close to as soccer-mad as the kids here, but I played pretty frequently and consistently for a number of years when I was growing up. (Let's not start a discussion about how bad I was. Suffice to say that after seven years of play, I was worse than when I started out.) I remember a particular ball that I had for at least four years, probably more, and while it was beat to hell, it still held air.

I know there are a lot of thorns around here, and the kids have no easy way to top up the ball (though people in the village do have pumps), but it still seemed preposterous how quickly they annihilated these things. I watched them take a brand-new soccer ball and reduce it to a flabby, leaky mess in one day. Curious, I inspected the ball to see if there were any obvious damage. Sure enough, there was a slash about an inch long. I looked at the rest of the balls. Every one had an identical cut. The kids had stabbed a hole in every ball.

The only possible justification I can see for this is for trying to top the ball up, even though it won't stay up, what with the giant slash in the side and all. The thing that baffles me is that the kids love soccer. These balls could last them, if treated well, for years. Treated incredibly poorly, they could last months. This is just one step above throwing the thing right in a wood chipper. Judging by how long a ball lasts, the very first thing the kids must do is cut it--"Say, is that a brand-new charity ball you have there? Well, obviously the best thing to do is to insert this knife in the side."

Philanthropy has its limits.