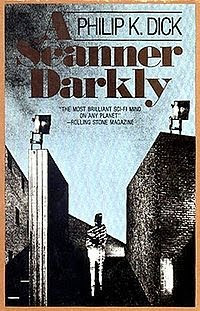 Up today: A Scanner Darkly, by Philip K. Dick. (It's been a bit of a binge on the PKD, I know.) Yet another audiobook, this one recorded by Paul Giamatti. It is a bit odd to hear a big-name actor reading to you, and Giamatti really acts some of the more intense scenes, more so than the average reader. But once I got used to his voice, he did an excellent job.

This is again classic Dick, introspective, paranoid, and philosophical. It consists of several interrelated topics. The first is the paranoid story of Bob Arctor, an undercover police officer who, due to infiltration, wears an "scramble suit," which hides his identity even from his police colleagues. He is addicted to "Substance D," which causes the hemispheres of his brain to split. Arctor develops two personalities, one police, one druggie, and begins to forget he is not the same person, and Dick provides some deeply creepy internal thoughts of Arctor as he slowly loses his mind. Dick proposes some novel psychological theories to account for this madness.

The second is an extremely good depiction of drug culture, the best I've ever read. Dick's collection of stoners have long, hilarious conversations about random topics--Dick weaves a perfect combination of concentrated focus and compounding errors in logic and facts. It's obvious (as Dick states at the end of the book) that he himself was heavily into the drug scene at one point.

The third is a disturbing prediction of a near-police state where surveillance is ubiquitous and the line between criminal and law enforcement is extremely unclear, boosted by Dick creativity like the scramble suit, leading to a man conducting surveillance on himself. The book is worth reading for these three levels alone, but I would like to set them aside.

The fourth section doesn't come into clear view until the Author's Note at the very end. Dick describes how himself and the people he knew were affected by drugs:


This has been a novel about some people who were punished entirely too much for what they did. They wanted to have a good time, but they were like children playing in the street; they could see one after another of them being killed--run over, maimed, destroyed--but they continued to play anyhow. We really all were very happy for a while, sitting around not toiling but just bullshitting and playing, but it was for such a terrible brief time, and then the punishment was beyond belief: even when we could see it, we could not believe it.

Drug misuse is not a disease, it is a decision, like the decision to step out in front of a moving car. You would call that not a disease but an error in judgment.

When a bunch of people begin to do it, it is a social error,a life-style. In this particular life-style the motto is "Be happy now because tomorrow you are dying," but the dying begins almost at once, and the happiness is a memory.

I loved them all. Here is the list, to whom I dedicate my love:

. . . and so forth.
In Memoriam. These were comrades whom I had; there are no better. They remain in my mind, and the enemy will never be forgiven. The "enemy" was their mistake in playing. Let them all play again, in some other way, and let them be happy.

Clearly this is an intensely personal list, and Dick avoids the usual cliches about drugs. Clearly he has the right to speak about his own life, and I don't want to cast aspersions on the novel as a novel--I thought it was very good.

But one of my pet peeves is people who portray drug addiction and all the accompanying misery as a natural consequence of any drug use, as Dick does in his Note. The street name of Substance D in the book is "death," or even "sudden death." It's incredibly addictive, and quickly causes massive and irreversible brain damage--far more dangerous than any real drug. It's like what drug warriors would have you believe about Ecstasy--any casual use leads you inexorably down a road where you end up so fried you can't remember your own name.

I've long thought the stories of junkies, with all their gritty realism, give a misleading view of the reality of drugs--a reality that must be handled with policy, not novels. Take, for example, cocaine. This review article (which I highly recommend) by Peele and Stanton lays out some statistics:


After a decade when cocaine use was reported to be rampant and uncontrollable for a sizable group of Americans, the 1990 National Household Survey of Drug Abuse (NHSDA) found that 11.5 percent of Americans reported ever using cocaine, 3 percent used cocaine within the past year, and 0.9 percent used in the last month (NIDA, 1991; see Harrison, 1994). Of current users (those who have used the drug in the last year), a third used the drug 12 or more times a year, and 10 percent used cocaine once a week or more. These results replicate another, earlier study:

A Canadian survey found 5 percent of current users used monthly or more often (Adlaf, Smart, & Canale, 1991). But monthly and weekly use are far from addiction, and only 10-25 percent of regular users resemble clinical addicts, or about 1-2 percent of all current users (Erickson & Alexander, 1989).

One of my many insane ambitions as a writer is to wrest the characterization of drug use away from depictions like Dick's, away from the leer of the hedonists. It's a difficult task because drug use and abuse make such great dramatic seasoning. Yet characterizations like Dick's are fundamentally misleading about the nature of drug use and play into the war on drugs, one of the worst failures of any US policy. That was basically the only flaw in an otherwise excellent book.

I hope I don't have to emphasize that I'm not recommending drug use here. This is a policy argument, not a personal one. Obviously you would be better off staying away from cocaine and the like, but I'm not going to beat down your door and shoot your dog to stop you from doing so.

(Further reading: The Consumer's Union Report on Licit and Illicit Drugs. A bit dated but absolutely essential for a good understanding of drug effects and policy.

This study by Glenn Greenwald, done for the Cato Institute on Portugal's recent decriminalization policy.)