Book review: The Man in the High Castle 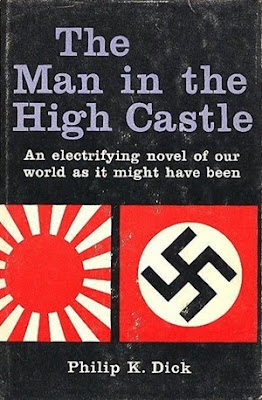 Up today: The Man in the High Castle, by Philip K. Dick. It's an alternate history piece, one of the most influential. Though it wasn't the first of its kind, it brought that kind of novel into the popular consciousness, especially the kind where Germany and Japan won World War II. It won the Hugo Award in 1962.

Side note: once again, I didn't read this, rather I listened to it. The reading was by George Guidall, an amazingly prolific guy who's turned up all over the place. I think this is the sixth performance of his I've experienced, and he has yet to disappoint.

The setting is post WWII. Japan has taken the west coast of America, the Reich the east coast, while the middle has been left as a nominally independent buffer zone. Dick is absolutely fantastic at describing the situation, weaving just enough details and hints through the narrative and internal thoughts of his characters to make a totally convincing world, while your imagination is left to roam at the same time. The Mediterranean has been dammed and drained, and the Nazis have tried their level best to exterminate all of Africa. The Japanese come off as, while racist and imperialist, much more sympathetically than the Reich, which is of course brutal and insane.

A lot of the plot is driven by the I Ching, which is a book of ancient Chinese philosophy and a divination tool. (I had to look it up, not having much experience with Eastern philosophy.) It was a bit distracting, but apparently Dick himself used the book to help him write The Man in the High Castle.

Like the other Dick novels I've read up to now this one is shot through with a heavy dose of philosophy and takes place largely in the minds of the characters (who are depicted brilliantly). It's about history, and anticipates a lot of postmodern critiques of more traditional historical theory. In a key passage, one character compares two lighters:

She said, 'what is "historicity"?'

'When a thing has history in it. Listen. One of those two Zippo lighters was in Franklin D. Roosevelt's pocket when he was assassinated. And one wasn't. One has historicity, a hell of a lot of it. As much as any object ever had. And one has nothing .... You can't tell which is which. There's no "mystical plasmic presence", no "aura" around it.

This relativist position is not convincing, but disturbing to contemplate. A major device in the book is a book within the book called The Grasshopper Lies Heavy, an alternate history where the Allies won WWII. What is true? What is reality? Dick's not going to give you a straight answer.

Overall, this was classic PKD: a head-spinning philosophical masterpiece that left me pondering for days. Highly recommended.