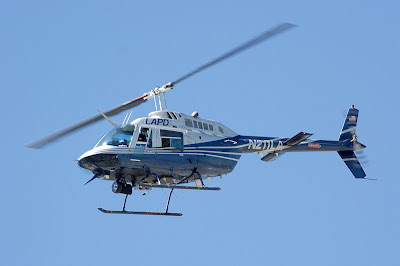 So yesterday I'm watching Grade 5-6 finish up their classwork with about ten minutes left in school when I hear the characteristic thump of a helicopter. Everyone including the teachers rushes outside to have a look. I assumed at first that it must be a small cropduster-type plane, but sure enough, it's a helicopter. It banks low over the school and circles back for another pass, then incredibly lands on the soccer field about 200 yards from the school. All the kids are going nuts. I doubt there's three that have seen an airplane up close.

I notice it's a police helicopter, which is a bit troubling. I think they might be looking for me, but someone else gets in the helicopter and it takes off after a few minutes. A call to my APCD confirms that it has nothing to do with Peace Corps. I spend the next half-hour trying to convince my kids that it's not my father's helicopter, and go on my customary run a bit later.

When I come back my host sister tells me that it was the police looking for an escaped convict who allegedly raped and murdered his ex-girlfriend in a village 30 km or so from here. The helicopter, during the course of the police's search, picked up someone who knows the suspect in the village and took him to Kuruman. The suspect is supposed to be just hiding in the bush somewhere. I'm sure I'm not in any danger, but running alone out on the road certainly lost some of its appeal. I hope they catch this guy soon.