South African jurist in the news 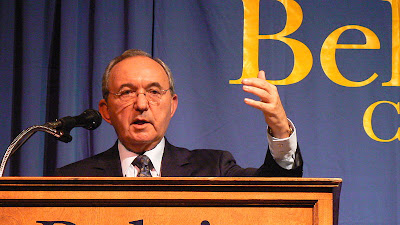 Richard Goldstone is a Jewish South African judge who wrote a report about the 2008 war in Gaza. The report found that while both Hamas and the Israel Defence Force committed war crimes, those of the IDF were worse.

This brought the predictable reaction from Israel, AIPAC, and then the US Congress. They called the report biased, and some in Israel started a smear campaign against Goldstone himself, culminating this week with an investigation by Yediot Ahronoth into Goldstone's Apartheid-era judicial rulings. Alan Dershowitz made the inevitable comparison to Nazis:

Now it's probably true that Goldstone was involved in the legal administration of Apartheid--it would have been unavoidable as a judge during the time. Yet he oversaw the Goldstone Commission, which provided crucial reports on violence during the negotiations around the end of Apartheid, was appointed to the Constitutional Court of South Africa by Nelson Mandela, and was later the chief UN prosecutor in the war crimes case in Yugoslavia and Rwanda. One can't point to Goldstone's early career only and conclude he's basically a Nazi.

The real irony of the situation was pointed out on the Foreign Policy blog:

High-level exchanges of military personnel soon followed. South Africans joined the Israeli chief of staff in March 1979 for the top-secret test of a new missile system. During Israel's 1982 invasion of Lebanon, the Israeli army took South African Defense Force chief Constand Viljoen and his colleagues to the front lines, and Viljoen routinely flew visiting Israeli military advisors and embassy attachés to the battlefield in Angola where his troops were battling Angolan and Cuban forces.

There was nuclear cooperation, too: South Africa provided Israel with yellowcake uranium while dozens of Israelis came to South Africa in 1984 with code names and cover stories to work on Pretoria's nuclear missile program at South Africa's secret Overberg testing range. By this time, South Africa's alternative sources for arms had largely dried up because the United States and European countries had begun abiding by the U.N. arms embargo; Israel unapologetically continued to violate it.

What's more, Israel itself is in danger of becoming an apartheid state (or already is), according to Desmond Tutu, Jimmy Carter, the Congress of South Africa Trade Unions, and the South African government.

I highly recommend this New Yorker article to learn more about the recent war in Gaza, as well as the effects of the crushing Israeli blockade.