Saturday wall of text: what's the matter with the South African education system? 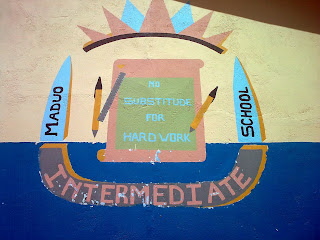 In my long tradition of blithe opining about of vast swathes of the world, I'm going to take a crack at the South African school system. The problems here are evident: of the roughly 1,600,000 students that entered Grade 1 twelve years ago, more than two-thirds didn't even make it to sit for the matric test (the one that earns a diploma). Of the ones that sat for the test, about 60% passed, and only about 30% passed with high enough marks to enter a university. This last group thus comprised about 7% of the original 1,600,000.

Disclaimer: there is a huge difference between the tiny minority of wealthy well-staffed schools and the rural schools where I have the most experience. Yet I believe it's not absurd to generalize my experience at least partially across rural schools throughout South Africa regardless of province or culture.

Let me first tackle the curriculum. Probably the biggest problem with the South African education system (and throughout SA generally) is implementation. They have here a curriculum that is jaw-dropping in its ambition and scope, but what happens in the classroom bears only the slightest resemblance to what is in the policy. Many teachers are unqualified (probably even a majority in maths and science), and often don't even try to teach the few things that they do know.

This curriculum (called RNCS--the Revised National Curriculum Statement) was adapted from the latest in outcomes-based education (OBE) from Western Europe and the US, and carries the full weight of a similar bureaucracy in those countries. Here we have all the foot-dragging, CYA, procrastination, and endless meetings that one finds in the worst kind of organizations in the US with almost none of the attendant competence that would make it function. This lack of competence is crippling in a system that presents educators regularly with labyrinthine logistical problems. It ends up that even the better educators spend a large amount of classroom time organizing the various documents they need according to the (often changing) policy.

(On a side note, I do think a national curriculum is a good idea. The US almost has a de facto one already in that most states just follow a few states like Texas--though it has decreased somewhat in the age of digital publishing. It seems odd to let Texas have that kind of influence without a national discussion--and especially because they are prone electing fundamentalists who try to erase the "liberal bias" from reality.)

A related problem is that educational standards have been raised been too fast. To take a population that had been systematically denied reasonable education for 50 years and stuff them into a Western-style program is not likely to work. Most schools end up failing so badly that they do worse than if they had aimed a bit lower--basic multiplication is often beyond the reach of Grade 12s. Note that I'm not saying South Africans would be incapable of learning the curriculum, rather that effective learning requires many educationally-primed institutions, and not just schools and educators. Parents, libraries, and even just baseline culture play a part. (As an Indian-descent person at PST said: "I'm going to be bold. We don't have a culture of learning in this country.") One of my students with the proper resources could easily excel, but it's going to take a couple of generations being successfully educated before rural South Africans are ready for RNCS.

So there's a problem with the curriculum going too far, too fast. But I also think it's just too damn hard. South Africa's national standards are far more demanding than the average state curriculum in the US. Though I am often disgusted with the ignorance of Americans and wish our math and science standards could be tightened up, the amount of material one is expected to master here to get a high school diploma is ludicrous. In math and science (the areas I'm most familiar with), the standard is knowledge of college freshman (and occasionally sophomore) material--in chemistry, physics, biology, and maths.

Perhaps there are some countries that can manage that, but South Africa isn't one of them (neither is the US), and I don't think it's strictly necessary in order to have a decent education system. (I didn't learn half that crap at my rural public high school, and I'm not completely brain-dead.) I think deep-down they know that, so they put the passing percentage for the matric test at 30% and give that vast science material very cursory treatment (the math isn't quite as bad). One can't learn calculus based physics and calculus at the same time (or it would be damn hard, anyway) so instead here they learn all the results of calculus-based physics without actually doing any derivations. There's a similar treatment in chemistry, where periodic trends, atomic characteristics, and bond theory are mostly ignored in favor of batteries and soap. Not only is it basically impossible to choke down that much stuff, it isn't even a good preparation for the real discipline in college or as a professional, where the process is often more important than the results. A much narrower science curriculum that went into a few interesting topics like astronomy or quantum physics in detail would be more successful, and would inspire a greater interest in science than I've seen. Literally every single graduate of high school I've met here despises science.

The last point I'm going to touch on is the culture of entitlement that has sprung up here. Protests, sometimes violent, for lack of services are common. I see this in the schools, where at the drop of the hat the students will organize to protest a minor change, and where the teachers will protest as part of a general strike. I also see it in the anger from beggars and tsotsis here, like I owe them my possessions.

Obviously I'm treading a fairly fine line here. I don't want to infringe on people's right to organize and protest the government for a redress of grievances. I've often felt that in the US, there is far too little mass demonstration, and what 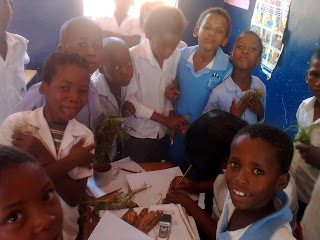 is there is often ignored by the media. Yet I feel South Africa has the opposite problem. Last year, in the middle of the worst economic downturn since the Great Depression, municipal workers struck for a 15% pay increase, rejecting an 11.5% increase. Where this causes problems for education might be called "employee capture," where the education system is configured with the maximum benefits for the educators, not the learners. By some definitions South Africa is in the top five spenders on education, most of it on salaries. Unions have made it quite difficult to fire teachers here (though there have been some changes to that recently).

The problem of how to solve these problems is a bit more than even I am willing to bite off today. Any suggestions?