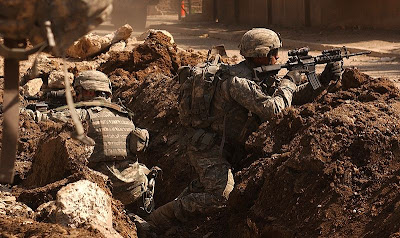 The bloggers I read most frequently are four: Matthew Yglesias, Kevin Drum, Andrew Sullivan, and Ezra Klein. Yesterday, I learned that all of them supported the Iraq War. (I already knew about the other three.) All of them have recanted their previous opinion, and probably learned a great deal from it. (Drum, most satisfyingly, said it was really fucking stupid of him.) Yglesias and Klein were pretty young at the time--they're only a couple years older than me. Still, that's a fairly devastating thing to be wrong about. When my convictions developed a little more, I thought--and still think--that the invasion was the most boneheaded major policy decision ever committed by the USA. Not the most horrible or devastating, but just the rawest, most undiluted dose of stupid ever. Way dumber than Vietnam.

It got me wondering though...what did I think back then? I was a junior in high school, so it's a bit fuzzy in my mind. I was against the war, that much I remember clearly. I was seventeen and loathed Bush, the usurping bastard, but didn't know a great deal about Iraq. My AP English teacher had us answering questions while we watched the morning news about the war, and I remember looking over the answers a few years back. They were astonishingly foresighted questions, things like, "How long do you think the occupation will last? How much will it cost?" As I recall most of my answers were pessimistic, but not nearly enough as things turned out.

The one clear opinion I can recall was that the rationale behind the whole thing seemed bizarre. Hussein had been a running joke in school for years, getting his clock cleaned by the US every ten years or so, no threat whatsoever. Suddenly it was terrifically important to take this guy out. I remember thinking, What changed? Hussein couldn't beat Wyoming in a fair fight, and if he releases some biotoxin shit, then by God we'll nuke Iraq into a sheet of glass. If he's insane enough to do that, why hasn't he done it before? Cheney would have said 9/11, but as it turns out Cheney is really fucking stupid.

UPDATE: You know who else supported the Iraq War? Dan Savage, in an utterly brain-dead article for The Stranger. It has to be read to be believed.