I am totally exhausted 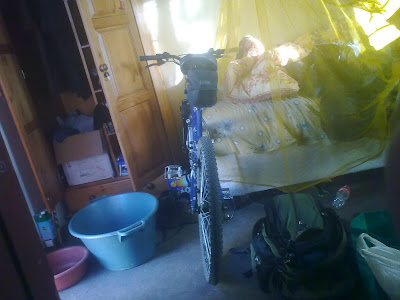 I just got a new bike. My friend from Heuningvlei, who got the bike from the previous volunteer that lived there, didn't want it. But I had to ride it 56 km back from his village over hellacious washboards. It wasn't that hard, but boy it was long.

It's nice to have a free bike, but I'm a bit spoiled with a mountain biking hobby from back in the states. This sucker weighs about thirty pounds. It's got dual suspension, but it's basically one of those cheap Wal-Mart style jobs where the frame feels like it's made of solid iron. All I can say is that if it weren't for bike shorts I think I would be forever sterile.