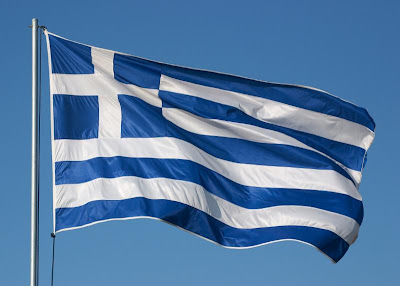 I've often thought that this blog would be more popular if I stuck to a few topics rather than the disorganized jumble that I usually emit. We all can't be generalists, and Yglesias and Ezra Klein already have that territory pretty much staked out.

Still, I must follow my mad passions wherever they lead. To wit: the last few weeks Greece (with Spain and Portugal in the wings) has been heading toward default on their debt. Basically, Greece borrowed too much (even hiding the debt with accounting tricks, helped along by Goldman Sachs, of course), and rampant speculation is driving up the cost of borrowing as default looks more likely--which is of course a self-fulfilling prophecy. Normally in this situation one would simply inflate the currency a bit, which would shrink the debt, reduce effective wages, and make exports cheaper, which would increase competitiveness.

But Greece is on the Euro, and the European Central Bank (ECB) is controlled by German hard money fanatics. Harsh austerity measures are taking effect in Greece, but this is causing riots and doesn't seem to be enough in any case. Krugman laid out the endgame options here and here:

If Greece were a highly cohesive society with collective wage-setting, a sort of Aegean Austria, it might be possible to do this via a collectively agreed reduction in wages across the board –an “internal devaluation.” But as today’s grim events show, it isn’t.

The alternative is a devaluation — which means leaving the euro.

Any announcement of plans to leave the euro would, as Eichengreen points out, trigger disastrous bank runs. By the same token, any suggestion by outside players, like the ECB, that the option exists would amount to invoking a speculative attack on Greek banks, and therefore can’t be made. The whole thing is effectively undiscussable.

But that doesn’t mean it can’t happen. Greece is already starting to look like Argentina 2001.

I hope that somewhere, deep in the bowels of the ECB and the Greek Ministry of Finance, people are thinking about the unthinkable. Because this awful outcome is starting to look better than the alternatives.

Even though Greece is only 3% of the Eurozone economy, the risk of the crisis spreading to Spain and Portugal would be great as speculators moved on after a Greek flight from the Euro. Thus today the EU came out with a trillion-dollar rescue package aiming to break the death spiral by main force.

This is all pretty new to me, but apparently a lot of prominent economists (like Krugman) had serious doubts about the whole Euro idea when it was implemented. It seems they are now being proven right. Yglesias had a great primer on the European Central Bank the other day that included this nice summary:

Problems: The whole enterprise has always has its doubters. American economists felt the zone wouldn’t be able to adjust to recessions. Germany worried that others would take on too much debt and leave them holding the bag. Small countries worried that they’d be forced to suffer through inappropriate monetary measures. Essentially all of these problems are now occurring simultaneously.

UPDATE: Here's a sweet pentacle of doom showing the interrelated debt of the weak economies in Europe: 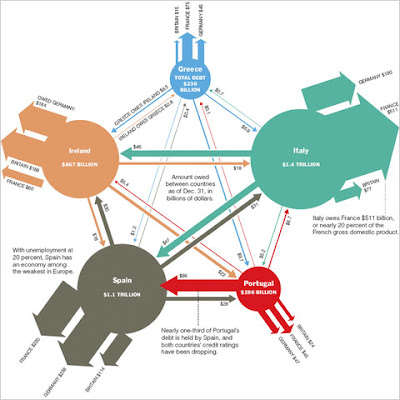