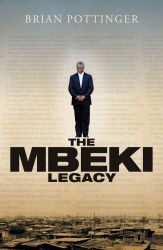 Up today: The Mbeki Legacy, by Brian Pottinger. This book takes a hard look at Thabo (coincidentally my Setswana name) Mbeki, the president of South Africa from 1999-2008. The book, while noting Mbeki's relative success in providing macroeconomic stability and reasonable growth, is mostly savagely critical of the Mbeki and the ANC. The main fault, according to Pottinger, was "ideological overreach" in that policies were often either flat-out ridiculous, or appropriate only for a much more advanced country with a very competent bureaucracy (like Germany or Sweden, for example). Affirmative action (which Pottinger acknowledges as vital) was undertaken so quickly and haphazardly as to cripple public services; he gives the example of the electricity shortages and blackouts in 2008--when in 1998 Eskom (the public utility) had large excess capacity and extremely cheap power. In a panic, Eskom ended up hiring many white engineers, some over seventy, who had been dismissed years ago.

Another overreach is the explosive growth of the welfare state--more than quadrupled under Mbeki--to a size simply unsustainable by a middle-income country. About a third of South Africans say they are dependent on the government for survival. This leads to a society of dependency, entitlement, and grievance.

Pottinger also identifies a great deal of corruption and cronyism throughout the government, which is the main culprit behind the chronic lack of service delivery, and partially responsible for the massive crime problem here. He cites the dissolution of the Scorpions, South Africa's elite police unit with an 85% conviction rate, known for raiding homes of the ANC elite, for what seem political reasons. Six percent of reported crimes result in a conviction here.

The education system comes in as the worst problem in the country, contributing to every other problem. Right now in South Africa there is an immense skills shortage--twenty percent or greater vacancies in every public service department, for example. (This is compounded my emigration, mostly rich and white, from crime.) The tiny minority of private schools, plus those once called "Model C," produce most of the high-scoring graduates. Pottinger lays this failure on the national curriculum, which he says is totally inappropriate for South Africa, and excessive union power making it nearly impossible to discipline teachers. He also faults replacement of the traditional industry apprentice system with a dysfunctional bureaucratic boondoggle.

A quick side note--Pottinger says the educational fiasco is worse even that Mbeki's AIDS denialism, because the AIDS epidemic is only partly due to Mbeki's inexcusable foot-dragging. He says the AIDS crisis is mostly the fault of "an embedded culture of public irresponsibility, which virtually nullified AIDS educational campaigns; a systemic failure by a number of AIDS and TB sufferers to take medication, so as to prolong state welfare grants; and the incapacity of an uncaring bureaucracy to implement the [anti-HIV/AIDS] programme." (p. 160) I can't speak to that point, but it's ancillary in any case.

It's hard for me to judge the accuracy of most of these complaints, but his diagnosis of the education system matches completely with my own observations. It's not hard to take the government failure in that area and imagine them doing basically the same thing everywhere else. I too have wondered (as Pottinger describes) why South Africa seems to be treading water or falling behind where other African countries--like Rwanda and even Nigeria--are making consistent progress.

Possibly the weakest part of the book is the solutions at the end--not because they seem poorly thought out, rather that it's impossible to imagine them being implemented. The systematic problems are so deep, the one-party state so entrenched, that nothing seems likely to change. Here's hoping, anyway.

Overall, a truly excellent book and a razor-sharp look at the problems ailing South Africa today, though a bit disorganized in spots. Highly recommended.