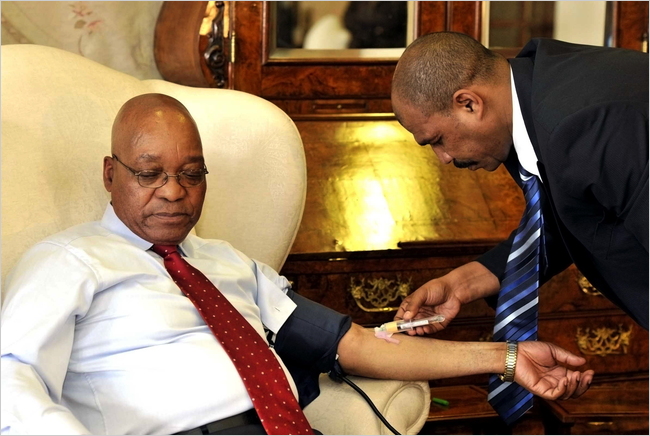 Here's some welcome news on the public health front. South Africa has started a new program to combat the AIDS epidemic:

South Africa, trying to overcome years of denial and delay in confronting its monumental AIDS crisis, is now in the midst of a feverish buildup of testing, treatment and prevention that United Nations officials say is the largest and fastest expansion of AIDS services ever attempted by any nation.

The undertaking will be expensive and difficult to pull off, but in the past month alone the government has enabled 519 hospitals and clinics to dispense AIDS medicines, more than it had in all the years combined since South Africa began providing antiretroviral drugs to its people in 2004, South African health officials said.

For now, though, there is optimism among the scientists and advocates who had despaired as the nation dithered on AIDS under its former president, Thabo Mbeki.

“I’ve never known such a gathering of momentum around H.I.V. as in the last month or so,” said Mark Heywood, who directs the AIDS Law Project based in Johannesburg.

Mr. Mbeki had questioned whether H.I.V. caused AIDS and suggested that anti-retroviral drugs were harmful. Harvard researchers estimated that the government could have prevented the premature deaths of 365,000 people during the last decade if it had provided the drugs to AIDS patients and medicines that help stop pregnant women from infecting their babies.

This is some good news. It's nice to no longer have an AIDS denier in office, no matter his other flaws.