By Ryan April 09, 2010
I'm not religious myself, but I appreciate school breaks. In the spirit of zombies and holidays obviously swiped from previous pagan celebrations, I present here my Easter tale. 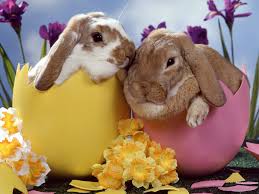 Mmm, fertility rites.
The first order of business was the marathon, which I've already mentioned, but I'd like to go into it a little more thoroughly as it was my first time and I quite enjoyed the experience. First, a little background. The last competitive running I did was in 8th grade, when I ran track and did the 200m and 800m events. I forget my 800 time (it wasn't great), but my 200 was a respectable ~26 seconds (respectable for middle school, heh). In short, I've never been a distance runner and always had antipathy for the whole business. That changed in the last few months, as I've spent hours training for this marathon and grew to like being out there on the road by myself. It seems that by pushing myself past the brutal misery stage I actually grew to like running.

The marathon course.
The course runs through the gorgeous mountains around Sabie and Lydenburg. The half-marathon course (21.1 km) is pretty easy as it's mostly downhill--so long as your knees can take the punishment. The ultra course, on the other hand (56 km) is astonishingly brutal--the first 37 km is 1150m (3773 feet) of uphill. The ultra started at 6 AM, while the half participants got bused to their starting point 35 km along.

It was cool and foggy at our 7 AM start, and stayed that way for most of the race. We stood around stamping our feet and listening to the serious runners at the starting line sing "Shosholoza." At the start, I was with a pack of about four other Peace Corps runners, but after the first twenty minutes or so, I lost them in the mist and was alone for the rest of the race. I didn't even realize it at the time--I thought they were still behind me until I looked back and I was alone. Perhaps because I was pacing myself well with my watch (trying to keep less than 5 minute splits on the kilometers), I was passing people for the whole race and was only passed a couple times. I was shooting for a sub-2 hour time, so my time of 1:46:43 was enormously satisfying. According to the race results, that puts me in 143rd place! There might be another half-marathon in Kimberly in May, and if so I plan on running that one. I think 1:30 is a good goal for next time.

After the marathon we bought some food in Sabie and took a five-day hike on the Fanie Botha trail. It's a beautiful hike that runs along little patches of virgin forest amidst a gigantic tree plantation. 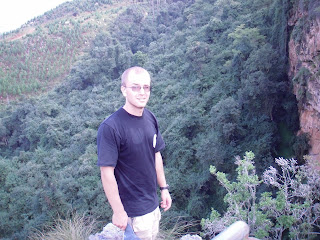 This chump kept following us around. Behind you can see where the plantation trees start.
After a reasonable hike each day they've got huts with showers, cooking pits, and flush toilets (well, one hut only has pit toilets and no shower). The second day was the toughest and the most beautiful, as you follow this steep drainage up and around several magnificent waterfalls. 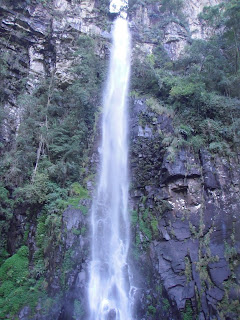 This one is called Cathedral Falls. 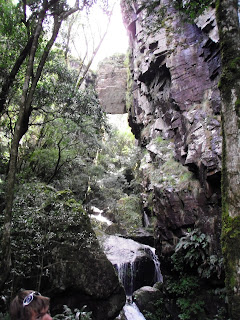 This one is called Chockstone Falls. I can't figure out why for the life of me.
Once we climbed out of the forest, we got into clear-cut zone where you could really see the extent of the plantation, and only in one direction--it's enormous. Must be dozens of square miles. 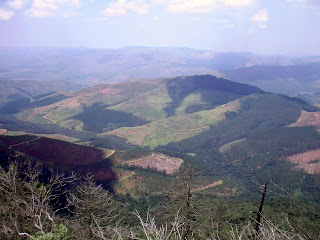 Later that same day we saw either some gemsbok or sable antelope and a troop of monkeys, though unfortunately I didn't get any good pictures. The next day the battery on my camera died, so that's about it for the pictures. The next few days were not quite so spectacular, but still beautiful. There were five of us in our group, and we got along pretty well. All in all, a great trip and a much-needed break from those rotten kids.