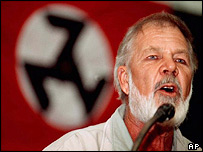 Last Saturday, Eugene TerreBlanche, one of the pivotal figures of the end of apartheid, was murdered at his home outside of Ventersdorp in Northwest province, apparently over a wage dispute. This comes in the midst of a racial controversy over a song sung by the ANC youth leader Julius Malema which included the lyrics "kill the Boer." (Boer is Afrikaans for farmer, and has become a rather offensive phrase for whites in South Africa.) ANC president Jacob Zuma and other ANC leaders are distancing themselves from Malema, but he has yet to be formally punished.

Terreblanche was a sinister yet somewhat goofy figure during the end of apartheid. His organization, the AWB (Afrikaner Weerstandsbeweging--Afrikaner Resistance Movement), used faintly disguised Nazi paraphernalia (like a three-pointed swastika) and brandished all kinds of weapons. They stormed the World Trade Centre during the CODESA negotiations. Later they showed the last gasp of white supremacist resistance when they invaded Boputhatswana and were humiliatingly defeated. He was imprisoned in 1997 for assaulting a black petrol station worker.

Despite TerreBlanche's obvious lunacy, this is a real blow for South Africa. The last thing we need here 10 weeks before the World Cup is this kind of racial tension. It's good to see Zuma and others being a calming influence. It would be nice to not hear any more violent songs, especially as many of us volunteers are right in that neighborhood (I just drove right through Ventersdorp on the taxi ride home). As former president FW de Klerk said, "It remains to be seen whether the Shoot the Boer song played a role in Mr Terre'Blanche's murder. However, at the very least it may have contributed to an atmosphere in which impressionable young black farm workers might have felt that their actions were somehow justified."