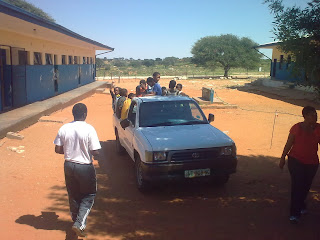 Today there was a big primary school soccer tournament for a bunch of the schools around the Moshaweng valley (the valley created by the wash running through my village). I spent most of the morning taking then printing out pictures of the eligible learners: boys under 13, grades 4-6, save one near-genius grade 7 boy. The paperwork requirements for this thing were stiff--you had to have a copy of your birth certificate, notarized by the local police station, a picture, and proof of enrollment in the school. Following the local safety guidelines, we loaded the boys up in a truck and drove the 6km to the next village. 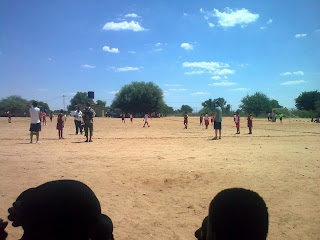 There we saw a few white guys, who were visiting from the UK and an international school in Hong Kong. They were helping one of the local teams with balls and uniforms. There's an organization called the Kalahari Experience that built most of these nearby schools, and these guys were loosely affiliated with that group. The guy from the UK was pretty friendly, but the others were a bit skittish, who knows why. I'm sure with my scruffy beard and goofy beat-up Afrikaner hat, I looked a little unhinged. I caught myself feeling a little superior when I could bust out my Setswana, but really I'm sure they're doing good work wherever they were.

The Kalahari Experience folks are coming during the upcoming term holidays to do some intensive programs with the kids while they're out of school. This sort of thing can easily become a contest with two volunteer programs from different countries, but I'm curious to see how they work. I'd like to see my village bombarded with German high-schoolers (though they don't stay in the village, they stay at the Moffat Mission in Kuruman). Like most volunteer programs (Peace Corps definitely included), I think this program is mostly for the benefit of the volunteers, but that's a subject for another post. 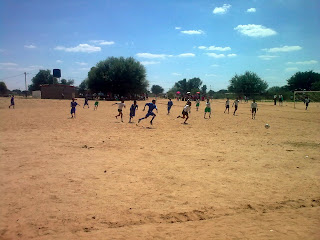 Anyway, the team from my village got to play next against the home school. They lost narrowly from a penalty kick in the last few seconds of the match, but played decently considering they started practicing as a team yesterday (no kidding). I'd like to point out the really short shorts some of the kids are wearing in the picture; they're the legendary Afrikaner shorts. Not just for the Afrikaners, apparently.