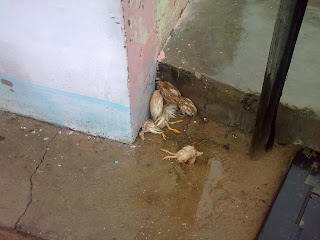 My host family goes through chickens at an unbelievable rate. Every week there's a hatching of 5-10 chicks, and usually within five days they are all dead. I'd estimate the mortality rate at ~90%. About half die from dogs and cats, and about half die of exposure or are crushed by their mates. You see, groups of similarly-sized chickens like to pack together at night like penguins in the Antartic winter. Of course they all want to be in the middle where it's warmest, so the smaller ones squirm under the bigger ones, where they are crushed during the night. They also don't have enough sense to find a dry place, so often if it rains hard you'll find several dead the next morning. I've also seen the mother hen unwittingly crush one of her own, or peck a different hen's chick to death. If my family were better at managing their stock they could have fresh chicken every day.

In other death-related news, my host brother is dying of AIDS (not the one I mentioned previously, another one I only met once). He's at my host sister's other house down closer to Kuruman and the hospital. Thus my host mother has moved down there to take care of him, and my host sister spends Friday afternoon-Monday morning down there too. In my family's compound, it's only myself in my broken-down shack and the girl who minds the store living in the main house. Pretty quiet around here.