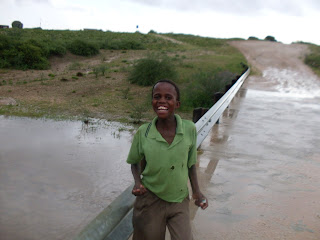 As I teach more and more I realize how I'm not really cut out for the job of teaching little kids (or Young Learners as they call them). Today the Grade 5 and 6 just had me at the end of my rope. Every time I turned my back they were shouting and hitting each other, and my system of punishment (where I write their name on the board as a warning, and give them check marks if they keep talking, each check meaning two minutes after school) just didn't seem to have an effect. By the end of class I had probably 3/4ths of the kids up on the board. The really bad ones (with 3 or more checks) I made sweep the classroom after school was out (which ended early because most of the teachers left).

One of these bad kids skipped out of the class while I had my back turned, which made me so angry I about lost it. The remaining ones swept in a self-pitying and sullen manner, throwing around desks and chairs, whining about how they were hungry and tired they were. They didn't seem to be learning a lesson from this, either.

They'd say, "Me, I'm tired and hungry."
I'd say, "Well, maybe you shouldn't talk in class so much."
"Mister, it's not fair! They all went home already!"
"They weren't being so noisy in class."

Then back to half-assed sweeping. After they destroyed the room moving the desks around, I made them tidy it back up again, putting all the desks and chairs back where they were. At this point one of the grade 6 boys made like he would slap me. I'm not sure what I would do if that actually happened. I wish I could say I would remain calm, but I'm not sure. I think I would probably lose my temper. I hope I wouldn't knock him across the room.

Something about the formal teaching environment plays to my weaknesses. I'm pretty good in small groups and one-on-one, but with a whole class of fidgety little kids I'm just terrible. Gotta keep trying, though, at the end of the day all this is my own fault. If I were a better teacher, I wouldn't have these problems--therefore, it must be a matter of technique, which hopefully can be learned. I'll keep experimenting.