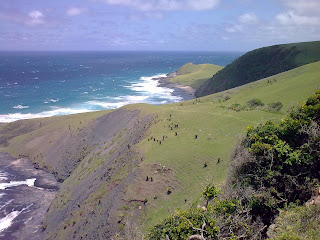 I hope everyone had a great holiday season and had a nice kiss over the last moments of 2009. Unfortunately my transition to 2010 was unmuffled, but as I was vacationing on some of the most beautiful coast I’ve ever visited, I had no cause to complain. At least now we can stop the “two-thousand” nonsense. Long live twenty ten!

So, I checked out my friend Noah’s village, which was broadly similar to my own save for a terrible ant infestation. He was quite manly about the little bastards as they didn’t really bite, but perhaps due to a childhood incident involving a red ant pile and a Tonka truck, I couldn’t bear the feeling of them crawling on my feet. “Bina!” said Noah’s host family. (Dance!)

We took a taxi to Pretoria, and stayed the night at a backpacker’s there. Pretoria’s a remarkable place; one can sense a nice little city struggling to be born out of the crime and car wrecks (a bit less than 1100 people died in traffic accidents in December alone in South Africa, one of the highest rates in the world). The backpacker’s is in a nice neighborhood with clean, tree-lined streets…if it weren’t for the spike-lined electric fences, you could be in Portland, Oregon. Jarring.

After some food and drinks at a local college bar complex that night (where I was forced very much against my will to dance in a lousy club) we spend the night at the backpacker’s. The next day we met the rest of our group (11 all told) and caught the night bus to Mthatha. Eastern Cape is a beautiful, rainy, rugged, grassy province—I was strongly reminded of Scotland, though I’ve never been there. If Braveheart is close at all, then I’m not too off base. Our destination was a place called Coffee Bay—we stayed at a backpacker’s called “The Coffee Shack.”

The coast was staggering. Around the bay were towering slate and granite cliffs where four-foot swells broke heavily on the rocks, surging tendrils of spray fifteen feet up, interrupted by half-mile beaches. The stuff of postcard legend, no airbrushing required. We did a lot of touristy things, hiking around, surfing, getting the everlovin Jeebus sunburned out of us, etc. I was careful with the sunscreen—most everyone else got badly burned (save Noah, who is weirdly resistant to the sun)—but I still got it pretty bad on my scalp. Damn alopecia.

The Coffee Shack seemed like a quick stopover, one or two nights, for people moving along the coast from Cape Town to Durban. All kinds of nationalities were represented: German, Dutch, French, Spanish, Israeli, English, South African, etc. Americans were a bit scarce, though I suppose that’s understandable. Personally, I liked that we stayed there for over a week. If a place is at all cool, it’s worth staying for a long while, kicking off your shoes, digging in your toes, and exploring. You also don’t spend nearly so much time moving around.

I read several books on the trip (maybe I’ll have a couple reviews later this week on my blog). The one that stuck in my mind was Don’t Let’s Go to the Dogs Tonight by Alexandra Fuller. It’s a brutally unsentimental look at her African childhood in Rhodesia, Malawi, Zambia, and Namibia. Reading about the war for independence in Rhodesia, the collapse of white rule, and the mass emigration of whites out of the new Zimbabwe, I’m again struck by the sheer improbability of what happened in South Africa in 1994. No war, no diaspora. It’s almost enough to require divine intervention.

So now I’m back home where they speak Setswana, a surprising pleasure to hear. Xhosa was beautiful but being totally out of the loop was a bit frustrating. At the Coffee Shack we met a couple Batswana who were totally blown away at this pack of Americans that all spoke Setswana (at least a little).

School starts next week, so I’m getting ready for that now, but I’ll be heading for a Peace Corps training the week after that.