To kill and butcher a cow

By Ryan December 12, 2009
WARNING: This post will be fairly gruesome. Don't say I didn't warn you.

I've always thought that people that eat meat should be willing to partake in the physical dismemberment of the animal in question, so when my principal told me that I was going to help slaughter a cow, I agreed. He said at first that I would be delivering the killing blow, which made me a bit nervous, but it turned out not to be the case. A bit of a letdown, actually. I've always wanted to prove to myself that I could actually kill something that large. I think the biggest thing I've ever killed is a prairie dog. In any case, we went over to a local farm owned by a man named Saudi who had the cow. We paid R4000 for a smallish heifer (there was a much larger one for R6000).

I didn't bring my camera to this part, which is a shame as it was the most interesting bit. They put a slipknot around the neck of the cow with a thick rope and took a turn around a nearby tree, so that with two guys pulling on the end the cow couldn't move very much. Then Mr. Saudi took a small pocketknife (no bigger than 4 inches long) and stabbed it in the back of the skull, where the bone is weak. The first couple stabs only made it flail around a bit, but on the fourth one (or so) hit home and the cow dropped. It wasn't dead, but incapacitated enough that they could work open a good-sized hole so the blood could drain out. After digging a hole in the sand so they could get a bucket under the wound, we just sat around for awhile as they cow's struggles got weaker and weaker. As far as humane considerations, it seemed a pretty brutal way to go. Somewhere at the time greenish stomach juice started flowing out, about three gallons worth it seemed. 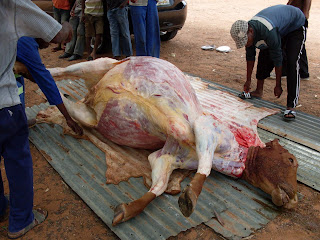 Then we hauled it up onto my principal's bakkie (pickup). Even smaller cows are heavy sonsabitches; it took eight of us to get it up into the bed. Before we left the farm, we stayed to have some bread and milk. Peace Corps says we're not supposed to drink fresh milk as it might have parasites, but I chanced it and had a few sips. It was delicious, even warm.

We drove slowly back to the school, where the work began in earnest. The first task is skinning, which is done by slowly working the skin away from the meat with a really sharp knife (though they were all still tiny pocketknives, nothing bigger than four inches). First the did one side, then they rolled it back over for the other side. This was probably the longest part of the butchery; I estimate that it took 45 minutes. 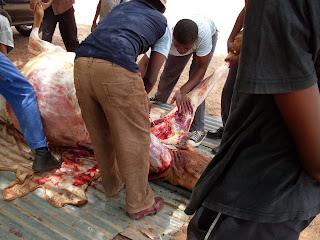 That knife there is mine.
After the fine work of skinning, the violence of removing the legs was a bit surprising. They just hacked the things off, and wrenched off all the ligaments and tendons. Then they punch a hole through a bit of skin so they can hang the limb from a tree by a bit of wire. It's important to get it behind a tendon so it doesn't fall. 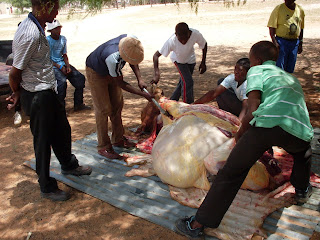 Once all four legs were gone, then they carefully cut open the abdomen to vent the gases that have been building up. They pick out the choicest guts first (kidneys and liver I think), then break out the hatchet to break open the breastbone and remove the stacks of ribs. This part required the most force, as they had to cut or break every rib. Mostly I was surprised at the size of the stomachs, which seemed at least twice as big as the rest of the guts put together (in the picture, it's that big white bag). It really takes some serious machinery to be able to digest cellulose. 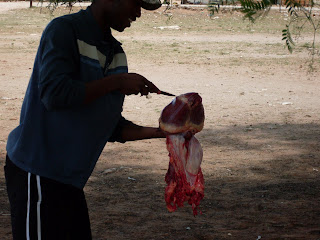 After the ribs are gone, the heart is accessible, which is quite the delicacy. I had a small bite which was lean but tasty.

Then it's pretty much a matter of sorting the guts and getting rid of the waste (mostly just the undigested grass in the cow's stomach). It's unbelievable how much was in the biggest stomach alone (shown below). It seems like these cows just eat all the time! 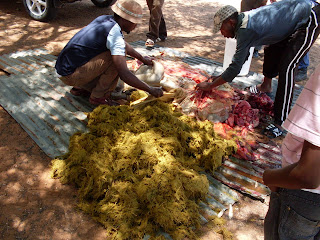 Hungry?
The whole situation was about a thousand times more rational and efficient than everything I've dealt with at the schools here. I reckon that simple businesses where the capitalist incentives are straightforward really help that along, not to mention that the Batswana have been butchering cows for the last few thousand years. This part of their culture at least wasn't destroyed by the colonizers.