By Ryan December 01, 2009
As a card-carrying liberal elitist, and given that it’s passed into December, I’m going to loose a salvo in the War on Christmas (cf. Bill O’Reilly) and say Happy Holidays!

For Thanksgiving, one of the volunteers rigged together a little party for a few of us in Kuruman. We got one of the bed & breakfast places to set it up for us—all we did was pay about $18 for a full spread. It was delicious, and a nice reminder that there are a few traditional practices that I can talk about with the Batswana. There are a tremendous number of the B&B/ lodge places in Kuruman, around 20 by my count. Yet there aren’t any US-style hotels. Not sure why that is. 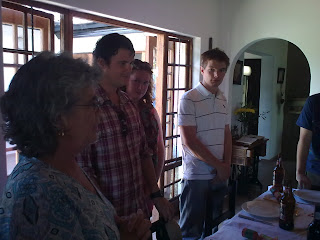 All these B&Bs are owned by Afrikaners, and last weekend I met more of those folks than I had in the past, and got a more subtle picture than I had up to then. After Thanksgiving I planned to visit another volunteer, so I went around town with him as he searched for some medicine for his horse, which has terrible saddle sores (more on this later). Every one of these stores is also owned by Afrikaners, and all of them knew my friend, who’s the gregarious type. He also bought an Afrikaner hat at the feed store, and we got used to people speaking to us in Afrikaans all day (brown brim hats are like a big Afrikaans poster). One lady randomly stopped on the street and gave us some mincemeat (ground beef) sandwiches that were delicious.

One of these horse experts told us all about his horses and the general brutality toward animals he witnesses with the Batswana. I can say PETA would have a fit here—the traces of the donkey carts are rusty wire and chains, and they whip the daylights out of the poor beasts. Sensitivity towards animals—or perhaps just efficient care of them—is developing slowly in rural South Africa.

Some familiarity with the Afrikaners (and white South Africans in general) has definitely changed my view. Before I came here I had a vague impression of them as horrible racists who were forced by the rest of the world out of their apartheid system kicking and screaming. There’s some truth to that, but personally every Afrikaner I’ve met here has been kind, courteous and generous. The apartheid system is surely one of the worst injustices in the modern era, but I knew almost nothing of the Anglo-Boer war, and the radicalizing effects of the British savagery (the usual concentration camps, salting land, poisoning wells, etc.). In the end, one must also remember that the whites gave up their power, grudgingly or not, in what is arguably the greatest diplomatic victory in postwar history. They also didn’t flee their country like Rhodesia (now Zimbabwe—whose white population halved overnight).

I’m not trying to romanticize the Afrikaners—I’ve met some real racists—but I don’t want to demonize them either. Situations like this are always messy and complicated, and it seems like there are more victims than genuine evil. 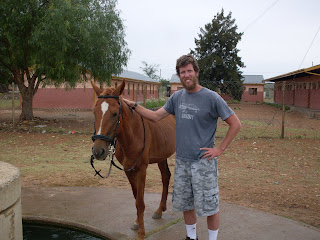 So after Thanksgiving, I took a long taxi ride with my friend Justin up to his village. He’s even further from Kuruman than me, 154 km or so. The town is quite a bit more developed than my village, probably because there was an asbestos mine there for many years. (Justin says that they’ll have 3G-capable cell service there next year!) A lot of these villages have no reason to exist, and are slowly withering away. The country is a lot different than around my village, with some rolling hills and a large salt flat from what I assume is a dried lake. Justin has a horse, and we practiced a little horse medicine on his saddle sores, troweling on some violent orange disinfectant paste. 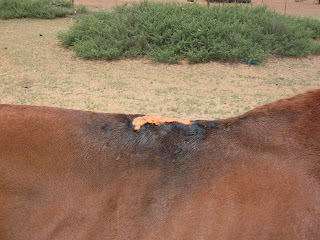 I’m inclined to agree with my father that owning a horse is like standing in a pile of shit tearing up hundred-dollar bills, but here it’s a lot more practical. When my friend gets his horse in working order, he plans to ride it around to visit other volunteers. It even has advantages over a bike, as you can’t get a flat hoof. At least he won’t have to buy a truck and trailer to haul the dang thing around. But as my financial situation will probably remain pretty tight, I’ll likely just get a bike.

With the holidays coming up and the weather doing a better and better impersonation of a pressure cooker, I’m looking forward to my vacation. I’m headed to Mathata in Eastern Cape, where we’ll strike out for the beach and any number of adventures (I hope). 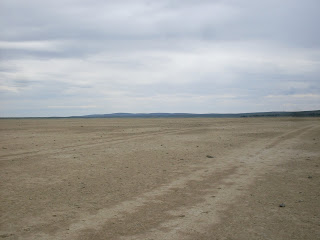