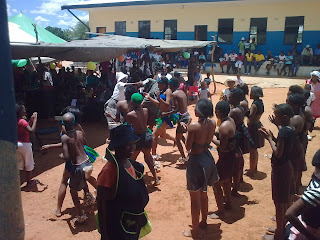 This wasn't too bad, as far as these kind of things go. All the Tswana get-togethers seem to happen in roughly the same way. First, it will start late and end later. There will be a long program where lots of different people give speeches. This will happen under a tent of some sort, and since it's summer it will be unbearably hot under there. There's breaks every so often for dancing or songs (shown to the left). The old ladies will get really into the dancing if it's good (or they're drunk), and sometimes they'll start dancing themselves and wade into the dancers. At the least they'll ululate, and if enough of them do that they'll drown out the singing. It will finish later than you could have imagined, and people will stay a long time getting wasted. Most importantly, everything will proceed in a completely haphazard and illogical way. See here for a good demonstration:

It's now getting on 1pm. We ask when we might make it to our tour and find out that our appointment there was for 11 o'clock and that that part of the the trip would not be happening. Apparently though, facilitating teenage drunkenness is every bit as worthwhile. We are still just parked, baking in the heat and we decided to check out this liquor store, thinking at least there might be a walk-in fridge. We find all the chaperones hanging out inside nonchalantly chatting with each other. They ask if we are there to purchase anything. We were surprised at this question. We were surprised that this trip had even stopped at this location, confused even. We ask if this is not irresponsible for us and share that this whole sponsored high school drinking thing was foreign to us. They reply that when we are in Rome, we must do as Romans. We asked if they would be making any purchases to which they replied in the affirmative. With the heat and stagnant feeling of the day so far, our arms did not have to be twisted very much and we glory in the walk-in fridge and make our purchases.

This one was basically true to form, but as my principal's daughters were there, I at least had someone to talk to since they are both fluent in English (and Afrikaans, and they speak some Sotho and Xhosa and Zulu. And Venda. And Swati. Suffice to say that I felt rather boorish). The food was delicious, and I must say I felt a lot less out of place than I have in the past. Since this was in my village, nearly everyone showed up, and every single person knew my name (with the exception of a couple out-of-town folks). I honestly had a pretty good time.