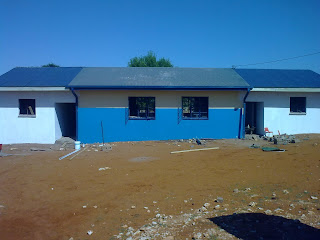 This is a picture of the staffroom of my school. On the left and the right you can see the new additions that started about a month ago. It's a kitchen on the left and an office for the principle/storeroom on the right. (One of the good things about the school--perhaps the best one, actually--is that the kids get a solid meal every day.) The cost, according to my principal, was 200,000 rand (about $27,000).

I've laid out many problems with South African schools, but money is not the chief one. Sure, they're nowhere near the monetary level of an American school (or the glitzy "Model C" schools here in South Africa that actually get near 100% pass rates on the matric test), but they've got more than enough to make do. They've already got two industrial-quality laser printer-copiers, and today the government dropped off another one (don't know why.) Massive piles of books go unused or even sorted.

South Africa is a rich country, especially by the standards of Africa. As I might have said earlier the city of Johannesburg accounts for fully 10% of the GDP of the entire continent. Like most rich countries the government is fairly corrupt and lazy, and throwing money at a problem is a good backup choice when their imported "National Curriculum Statement" collapses like a Goldman Sachs asset bubble.

I must say that the scent of concrete, sawdust, and paint made me unexpectedly nostalgic for home. Good old solid construction work--there's something honest about it that warms the soul.