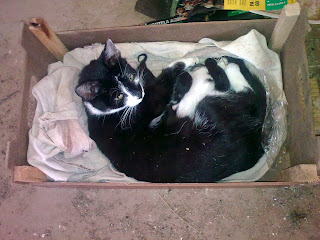 Yesterday the family cat gave birth to four babies. They're tiny, a bit hard to see in this picture. Their eyes are still closed, and they can't walk or stand up. Some people might hate me for saying this, but I really do like cats better than dogs (maybe because the runty, flea-ridden bastards bark every night for hours). The cats seem to have fewer fleas than the dogs as well--I think it's a different species that lives on cats. I find myself considering adopting one of the kittens for my time here. It would be nice to have a companion, and a cat would be so much less hassle than a dog. No doubt as they get older they'll be less attractive, but for now they're awfully cute.

The whole birthing process was interesting to watch. This was the mother's first litter, yet she knew exactly how things should go. When the baby came out, she licked it clean, then bit off the umbilical cord. When the afterbirth came, she ate it immediately. A model of efficency.

It's odd how animals can have that kind of complex behavior programmed into them already. The story with humans (as far as I know) is that as we evolved larger and larger brains, more and more development had to take place outside the womb because the baby had to pass through the mother's pelvis. One could imagine an alien species where there was no such structural restriction (or perhaps a egg-style gestation) and more genetic memory could be retained.