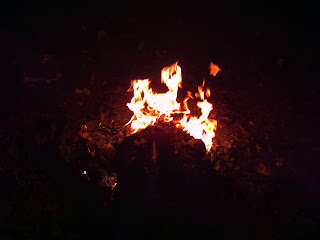 I had a good blaze going last night from my monthly pile of trash. This picture is from after it burned down quite a bit. Burning trash (as well as littering) is strangely thrilling. There's not much else to do with it--there are no dumps, and I don't want to bury things where people drink the water right out of the ground. Yet so many unspoken codes are being broken I feel almost criminal, in a good way.

At first, I started a small fire in case the plastic didn't want to burn. Then I upended my fridge's cardboard box with most of the trash in it over the top. This sealed well at the ground, making a square pillar of trash with the fire at the bottom. I thought it would smoulder slowly for a while, but after a couple seconds it burned like a gas flare. For a few moments the sides of the box contained it, and the fire poured out the top like the tresses of some demonic Rapunzel.

I wished that I had my camera, but I didn't want to miss it, and sure enough, it died down in only a couple minutes. Does taking a picture of something that beautiful and ephemeral cheapen its essence? Perhaps some of the beauty is due to the sheer transitory nature of flame. Still, I would get a lot of pleasure from posting a cool picture online, even if some fairy thing I couldn't see had to be imprisoned to do it. Maybe I'm just selfish.

Ruminations like this should be punctured. So in any case, with the box I think I acheived a much higher average temperature and burned most of my trash with much less soot and carcinogens than the average.