A thought on culture: a science major's attempt at pop anthro 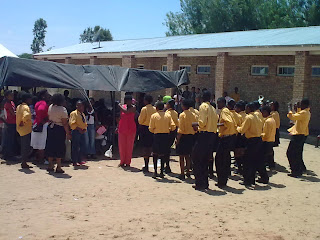 Last week I was at the neighboring village, attending what amounted to a graduation party, though the 12th grade doesn't graduate until mid-December. They sang, danced, chanted, prayed, ululated, whistled, and generally made a hell of a noise. The singing here especially stands out; it seems there are dozens of songs that almost everyone in the community knows (mostly hymns I suspect). Everyone knows how to sing, and follow along with 3-7 part harmony.

I tried to imagine something like this is the USA, and I just couldn't. Where in the US can you sing four notes of a song and have a crowd of 60 join in? "Take me out to the ball game," maybe. But we don't have culture like that, a shared set of assumptions that everyone takes for granted. It seems to me that US culture is more corroded--several separate influences have unconsciously or systematically destroyed our culture so that people take few things for granted, especially in the area of human interaction.

Materialism is one big cause, but I'd say the US is as much a victim as a perpetrator of that particular disease. Huge companies seem to behave largely the same throughout the world (though the details are always of course different), always promoting consumption for consumption's sake for obvious reasons. But materialism does make concepts like "values" seem cheap and false.

Feminism and the move toward political correctness in all areas is another. Female-male interactions have rarely been as tangled and difficult as they are now in the US, for the reason that all the old ways of courting (such that we had) have been destroyed, and their replacements have yet to evolve.

Imperialism is a third cause. When one's country is walking around the world, often thrashing the piss out of tiny, defenseless countries, one tends to view one's culture with suspicion, or even actively revolt against it. This is especially true as countries tend to become more humanist and free. The same thing happened to a lesser degree to imperial England.

I don't want to seem too radical here, so let me emphasize that I'm painting with an extremely wide brush, and a lot of this is 30-40% BS. Further let me say that I don't think all this is always a bad thing--suffrage, the civil rights movement, feminism, all destroyed some bit of unjust culture and rightly so.

I also don't think that the BaTswana necessarily have the greatest culture. Women are often treated like dirt, and there's an element of religious conservatism that I find grating. (I often wonder what they were like before the Europeans came and forcibly converted everyone.) Yet here, most people have a place to be, and people know how to interact in a way that doesn't exist in the US. It keeps them a little oppressed, in a way, but it also eliminates some of the existential angst that people tend to experience in the US.

Anyway, that's my BS pyschobabble for the day. Feel free to eviscerate in the comments.