News: in which I get robbed 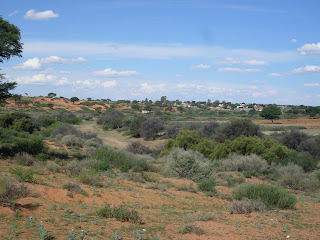 This is a picture of my village, maybe the best I can get. It's from one of my constitutionals down the riverbed.

I keep accumulating the various things I think I need to live; the last major item I've got down is a bike. Unfortunately that means my room keeps getting more and more cramped, with no wardrobe or table. I still have semi-regular attacks of spoiled-rotten feelings, especially when I think of others I've known that did the Peace Corps in the past. If I'm bored I've got two dozen books to read, or the entirety of The Wire and Star Trek: TNG, or surfing the internet. I had an idea of living in Africa (or at least the bits that the Peace Corps would send me to) in a very primitive way, forced to interact with a native culture that is totally estranged from my own. Here, most people speak some English, and are saturated with (somewhat garbled) American culture. Times change.

I've been teaching basically every day, though I do plan to travel to the closest village to observe some other teachers and see how they work. Quite frankly I'm an awful teacher, and my weaknesses are especially crippling here. I struggle with taking the initiative, with being proactive (especially in a situation where there are no standards whatsoever--if I so chose I could sit and read a book every day and no one would say boo), and especially with the kind of forceful personality (or perhaps magnetic charisma) one needs to have good classroom management. My instinctive attitude if someone doesn't want to listen is to say, "Fine, the hell with you. You don't want to learn, stay here forever. See if I care." Deeply American of me, I suppose, but it's something I must work on. It's just so many things coming at once--I've got to develop a curriculum (as the students aren't even close to on track), learn how to teach, learn how to manage a classroom, and deal with the ESL piece, without any help, or any examples. Daunting for an education newb like myself, but I wanted a challenge, right? *cough*

Honestly, the students are mostly fine here, and I'm sure any teacher worth a warm bucket of piss in the states could have them speaking Elizabethan English inside of a week. I should be grateful I have such easy students, and not the basketcases I remember from the Bronx. The fact that they come to school day after day is pretty impressive in itself. Mostly I hope to get my feet under me (or at least my knees and hands) this year so that when the next school year starts in January I can be ready to start fresh.

Yesterday I went to Kuruman again to run some errands. I went bike shopping, and found that most people ride these massive steel-frame monstrosities (like from Wal-Mart), but I did find a little shop with some better ones. They had some genuine mountain bikes for 8000+ rand (about $500--way more than I could afford), but also some alloyed ones for cheaper. The real mountain bikes were fascinating; everyone rides on these thorn-proof tubeless tires that have a latex sealant inside them, even a step beyond the auto-sealant I know in the states. Apparently the acacia and camelthorn here are waxy, so normal sealant doesn't cut it here. I'm not surprised at all, as every time I go walking down the riverbed I pull a dozen thorns out of each shoe.

I also bought some screen to make a screen door out of my burglar bars, and a pair of hiking boots that were probably more expensive than they should have been (about $100). Like a fool, I left the screen in my backpack and carried the shoes. I got some groceries and was heading back to the bus for the ride home when I stopped for a second to rest my hands. Up comes a "helper" who was in all likelihood following me. He grabs my shoe bag and one of the grocery bags and starts to walk off with them. Good old white male middle-class awkwardness stood me in good stead at this point. I put up a fuss, saying it's fine, I can take them, please give them back, etc. He of course refuses, and I was taken aback. What do I do? I should have set to howling, or yelled "STOP THIEF!" but I didn't. I figured I could watch him as we were close to the bus. Then as we're almost arrived another guy (they always work in teams) grabs my shoes and runs off with them. I'm helpless, hands full. My "friend" hands me the other bag (now that his accomplice has the expensive one) and makes like he's going to run him down. The shoes, of course, are gone for good.

A cheap lesson, all in all. I really was asking for that one, carrying something expensive down the street in plain sight. Next time I know what to do--if I had followed the Peace Corps advice, and assumed that anyone who touched my stuff or offered help was a criminal, I would have my shoes now. Yell, make a scene, get that sumbitch away from my things. Could have been much worse, and I'm definitely going to be a lot more vigilant in the future. I don't regard Kuruman as a dangerous place--the fact that I wasn't mugged, even being the worst kind of brain-dead lekgowa (white person), speaks to that. Criminals wouldn't be that bold, they're more weaselly and conniving. Which is a good thing. I sat around with all the old men and ladies at the bus rank, and after awhile I was kidding around about it. Nothing like a good lekgowa joke to get a laugh.

Still, I was a bit shaky and pissed for a while afterward. If I'm not careful, South Africa will make me into a sexist. More and more I look at males between 9-45 with open suspicion, and gravitate toward the old ladies for security. The grandmas are the backbone of this country--raising the kids, keeping house, running a lot of the businesses, while most of the men seem to just drink all the time or steal stuff. A bit unfair, but it's more than half true. I guess there's worse prejudices than disliking the young and the male.