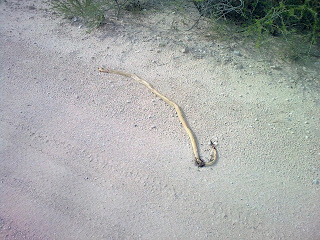 Unfortunately, this one was dead. Medium sized, I suppose I'd say, and I'm not sure if it was poisonous or not.

I took this picture with my cell phone, as my real camera seems to be on its last legs. The little telescoping lens part now gets jammed every time I turn it on and I have to switch it on and off while pulling on the lens to make it work. Not a good sign.

On the other hand I am rather pleased with the cell phone camera. I've long thought that was just a stupid gimmick that I would never use, but you really can't get a decent cell phone these days without one, so I went ahead and picked it up.

To my surprise I actually use it a lot, mainly because I end up carrying it around all the time. The camera is bulkier, but mostly I just don't feel super awkward and touristy carrying around a cell phone rather than a camera.

Of course, the pictures are a lot worse on the cell phone. It's only 3.2 megapixels (as compared to 8.1 on my camera, which isn't even very good), and there's no optical zoom. Still, better than nothing. I suppose as some point I'll have to pick up another camera, but it'll be awhile with my financial troubles. For the time being, you're stuck with crappy pictures.