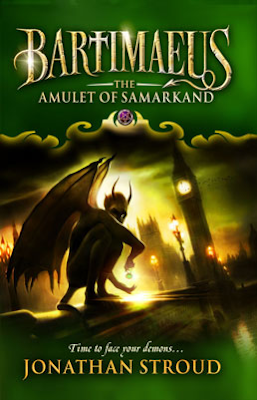 Well, I didn't actually read this one, I listened to it. Audiobooks are fantastic, and I think often improve my comprehension of the work. Best to do them both if one wants to get the most out of an important work like Blood Meridian (also great to listen to), but I didn't have the text in this case.

Back to business. The Bartimaeus Trilogy, by Jonathan Stroud, would probably be dismissively shunted into young-adult fantasy by a douchebag like Harold Bloom, but though the main human characters are young (Bartimaeus, on the other hand, is more than 5000 years old), I thought the themes mature and deep. More than worth reading if you're not too pretentious.

The story is an alternate history, where human magicians and spirits (the spirits live on a different plane of existence called The Other Place) rule the earth in a series of large empires. The magicians enslave the spirits by means of incantations, pentacles and runes, and force them to work magic. All the magicians power comes from these spirits, humans themselves are incapable of using magic. Historical kingdoms like Egypt, Rome and Carthage were societies like this.

Bartimaeus is a spirit of middling power, first summoned by a young magician called Nathaniel. The characterization of Bartimaeus is absolutely splendid; he's vain, wry, sarcastic, and hilarious, often going on long digressions on emperors or powerful magicians he served in the past.

Nathaniel is an idealistic young English boy who is quickly sucked into the machinations, backstabbery and politics of the English government (as the British Empire is the dominant empire of the moment). This is another of the book's strengths--the view of human nature and history, which is bleak, jaded, and cynical. He depicts the series of empires as inevitably mistreating their non-magician citizens (called commoners in England), who develop resistance to the magic and overthrow the government. A few generations later, another empire develops in a different part of the world. I detected a strain of the old Marxist historical process in this, with the inevitability of it all.

Another of the main characters is the more sympathetic Kitty Jones, who is a commoner bent on overthrowing the government, to be replaced with the old democratic parliament. She eventually develops a friendship with Bartimaeus.

Stroud wisely avoids too much political commentary about the situation and sticks mostly to the action, which is well-told. All throughout the voice of Bartimaeus, subtle and refined, keeps the book's feet on the ground.

Lastly, the reader Simon Jones did a superb job, most especially capturing the wry tones of Bartimaeus. If you're looking for some splendid middlebrow novels this winter, these are highly recommended.