By Ryan May 21, 2009
As a sometimes blogger, we all go through the phases of finding someone utterly wrongheaded on the internet. First you think, well, this person sounds sort of reasonable, I'll try to convince them with very careful language.

When that fails, and the person probably insults your mother or something, then you get a little riled up and write an extensive reply. 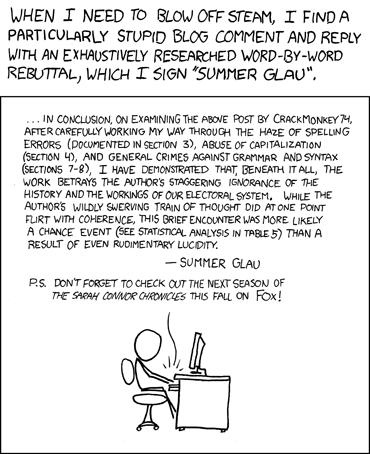 Enter Gevlon. Tobold had a similar experience with him awhile back. He's very good at making gold in WoW, good enough that he actually hit the gold cap which is something like 214,000 gold. He's also an diagnoser of human ills, and looks at everything from a holier-than-thou Ayn Rand sort of perspective, with a good dose of standard conservative prating about socialism thrown in for good measure. It's grating, but I foolishly tried to engage.

Then today, he honestly jumped the shark. He tried to argue that all poor people--mentioning Africa specifically--have a way to financial success just like rich people, and to prove it cited the Somali pirates and drug dealing. Seriously.

I wrote a longish comment saying basically that it was borderline racist to say something like that, and if your definition of a lucrative job is one where you have a decent chance of fighting Navy fucking SEALS, then you're out to lunch (in nicer terms).

I'd tell you what I said explicitly, but he deleted my comment. Long story short, if you see someone truly out there, don't bother trying to convince them. You won't. That doesn't mean I'm going to stop responding to him--I think the process of disagreeing with someone can help sharpen your own logic a lot, and writing practice is always good--but there's no hope of convincing him, or anyone else for that matter.