By Ryan Cooper June 05, 2018
I spent months working on an article — based on extensive interviews with eight different congressional candidates — about how the Democratic Party has failed to promulgate any strategic response from the Great Recession. Alas, online discussion of the article has been confined almost entirely to a setup historical phrase at the beginning. Matt Yglesias led the attack, accusing me of romanticizing the mid-20th century Democratic Party in order to slander modern centrist liberals. 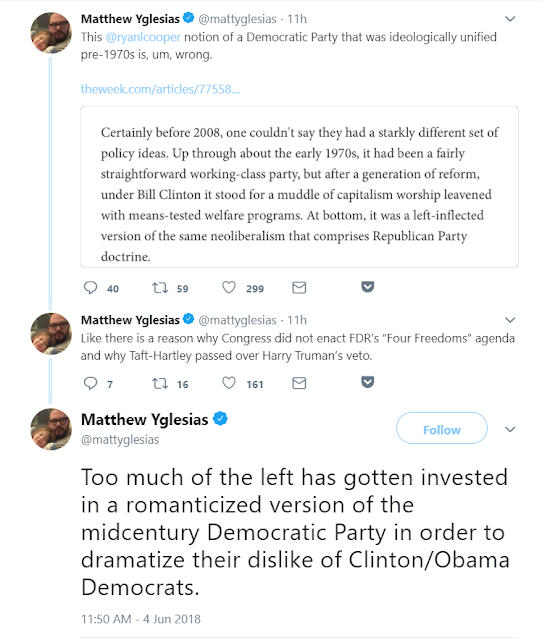 I will admit that the phrase in question was too strong. In particular, it obscures the enormous split between more populist northern liberals and segregationist conservative Democrats in the South (who did indeed tend to vote for union-busting legislation), as well as the split between more left-sympathetic Democrats and fervent anti-Communists. I know this history very well, and simply got a bit careless with phrasing.

But what I meant to invoke is the obvious and well-documented fact that the Democratic Party as a whole turned hard to the right on economic questions — on labor, anti-trust, the regulatory state, welfare, and so on — from about the late 1960s through the 1990s. The party was a sprawling mess then as it is now, and it was a complicated process, but contrary to the ludicrous revisionism (based on frankly dishonest quote-mining) of Jon Chait, this did happen. Its previously dominant populist New Deal tradition was slowly extirpated from the party, and a more conservative neoliberalism became the hegemonic ideology.

As I have argued at length before, and demonstrated empirically to some degree in my recent article, this has become a very serious problem for the party, because neoliberal Democrats have tended up line up behind disastrous policies like austerity when unemployment is 10 percent, causing human carnage and political disaster. It could be that leftists are romanticizing the past. But it also seems possible that neoliberals tend to get squirrelly and nitpicky about these sorts of arguments in order to distract attention from the world-historical failures of the ideological tradition to which they are committed.