Towards a Big-Hearted Liberalism 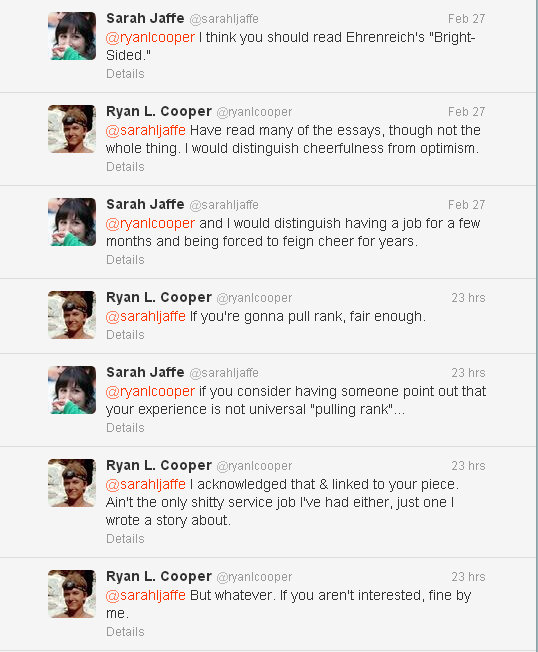 Before I get to the point, a bit of throat-clearing. I was profoundly irritated by this exchange. I was making what felt like (and still appears to me in retrospect) an honest, good faith effort to engage. That got me 1) instructions to read a book I have in fact read most of, and 2) an ad hominem implying I'm a service job tourist.* Maybe my point was wrong, maybe I was in fact perpetuating the oppression of the working class, but if so, I still don't know why, all that was accomplished was pissing me off. Eh, you might say, that stuff happens on Twitter all the time. But for some reason this one really got my goat.

(To be clear, I'm not holding a grudge against Ms. Jaffe for this. People have bad moods, maybe my post really was that dumb, maybe I'm taking offense unreasonably, whatever. Thanks to my new Twitter chum Alexios13 for providing some perspective.)

But after chewing it over for a bit, I think that this type of response that illustrates in a small way something in the broad left that could use some work. I'm not exactly sure what to call it, but if I had to hang a name on it, this is the best I can do: the tendency for pointless holier-than-thou inquisitions. The classic formula is finding fault in something and reasoning from there to sweeping indictments of a person's character, or implicating them in a great conspiracy to betray the One True Faith if you're feeling bold. It's also in the way "checking your privilege" can become a social climber's tool to bludgeon the impious instead of a route of exploration.


In fact, with some stellar exceptions, there was a pervasive atmosphere of cliquishness and, in some individuals, an overweening self-importance that was downright obnoxious. It was more pronounced than anything I encountered at Occupy. For a movement that wants to expand, they might want to consider some sort of systemic outreach, because for a newcomer to join it is quite overwhelming and requires mastering new terminology that almost amounts learning a new language, not to mention norms that seem bizarre to the uninitiated — like announcing, at every single meeting, your preferred gender pronoun along with your name. Seriously? I prefer She, Her, He, His, They?

The “Rainbow People,” a scruffy lot of vagabonds who travel on a dilapidated old bus, departed after being publicly chastised for saying “you guys” instead of “y’all” and not accepting the onus of white male privilege, among other transgressions. They also resented being told that they had to wear shirts and not peace signs. Hippie is an image shunned by most activists.

Naked Capitalism, the counter-establishment finance and economics blog, is positively swarming with this kind of stuff. I like Yves Smith, sort of, and her book ECONNED was really good, but she often pulls inquisitions on people who simply do not deserve it. The other day, it was perhaps the most decent person in the econ blogosphere, Steve Randy Waldman, in a wholly unreasonable post accusing him of extolling "deception and theft." (And that's nothing compared to what they do to, say, Matt Yglesias.) Emptywheel has this tendency too (with the same person), though not as bad. (UPDATE: And to be quite honest, Paul Krugman can be pretty bad on this too.)

I wish people would do less of this.

It's partly a matter of tone. Smith almost always adopts an iron-hard voice, often bordering on condescending arrogance, even when she is preposterously wrong on matters of fact, like the time she suggested caffeine could be used as a bioweapon. Less bitter, ranting snark and calling people idiots is a good start.

It's also in how things are read. Things ought to be read charitably, rather than nitpicking with fine tweezers and demanding answers for any perceived inconsistencies. People deserve the benefit of the doubt, especially those who have earned a little generosity. Waldman is definitely in that category and in my opinion so is Yglesias. For someone who likes most of his work, as I do, when Smith does one of her trademark THUNDERING DENUNCIATIONS I have to conclude either that I'm also a tool of the plutocrat overlords, or she's basically unreasonable and shouldn't be taken too seriously. Why force that choice when it isn't absolutely necessary? She does great work that shouldn't be sidelined by petty bullshit.

This is not to say that we must refrain from tough subjects or not give people the shank when they really deserve it. On the contrary—a serious takedown from someone who doesn't do them every other post will carry far more weight that from someone who does. And I'm not even saying that we must give up the snarky tirades that are the bread and butter of online writing—just that we be more careful with their application. My role models in this regard, off the top of my head: Chris Hayes, Alyssa Rosenberg, Ta-Nehisi Coates, and probably most of all, Conor Friedersdorf.

I'm sure if you combed through the archives here you could find many examples of me being a total shit too. I'm no innocent. But I plan to work on it.

It occurs to me that I'm basically recapitulating my previous argument. If that's somehow colluding with our capitalist oppressors, then I'm all ears.

*Just for the record, I have worked several years in shitty service jobs: as a cashier, dishwasher, manny for a very rich family, and teacher. Of those the last one was the most difficult by far in terms of emotional labor.