Drones Are Defensible, but They Are Not Being Used Defensibly 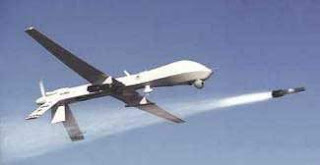 Andrew Sullivan, Glenn Greenwald, and Conor Friedersdorf have been in a bit of a spat over drones. Greenwald and Friedersdorf argue, in essence, that the drone campaign is doing more harm than good. Here's a representative quote from the latter:


Despite all these misgivings, it's the drone aided kill-stats to which Sullivan always comes back, as if our president's cool competence has allowed him to end the terrorist threat by remote controlled aircraft. But it really doesn't make sense to extol Obama every time a drone kills an Al Qaeda operative. There's no shortage of politicians who, if elected president, will give the CIA permission to fire on suspected terrorists in various foreign countries. Herman Cain would give that order. So would Rick Perry. Sarah Palin might even let drone operators practice on wolves. Would they be serving America's best interests in doing so? I don't think so. Neither does Jane Mayer. Nor Jeremy Scahill. Nor various anonymous officials quoted in The New York Times, who think we're creating more terrorists than we're killing.


What frustrates me about Conor's position - and Greenwald's as well - is that it kind of assumes 9/11 didn't happen or couldn't happen again, and dismisses far too glibly the president's actual responsibility as commander-in-chief to counter these acts of mass terror. If you accept that presidential responsibility, and you also realize that the blowback from trying to occupy whole Muslim countries will be more intense, then what is a president supposed to do? I think the recourse to drone warfare is about as reasonable and as effective a strategy as we can find. It plays to our strengths - technology, air-power, zero US casualties, rather than to our weaknesses: occupying countries we don't understand with utopian counter-insurgency plans that end up empowering enemies Moqtada al Sadr and crooks like Hamid Karzai, and turn deeply unpopular at home. Given our country's fiscal crisis, massive expensive counter-insurgency is no longer a viable option.

Let me establish what I think are reasonable underlying principles. First, the United States faces a real threat from terrorist forces, some based overseas. This threat is partially the result of blowback from US bungling and partly the result of crazed, zealous hatred of the US. As The Looming Tower shows, there really is an anti-Western Islamist ideology that is not based on a desire for vengeance, just like how the gruesome government bungling at Waco and Ruby Ridge were combined with violent, paranoid militia nuttery in the mind of Timothy McVeigh. Second, any use of state violence is not intrinsically productive or counterproductive. Some wars are just and others are not. I imagine even Greenwald himself would agree that in some instances killing someone with a drone strike could be worth doing.

The problem, then, is in how it's done—the regime under which the drones are operating. Who are they killing, and why? How solid is the intelligence? Right now, lest we forget, the military is killing people whose identities they don't even know:


Today, the Defense Department can target suspects in Yemen whose names they do not know. Officials say the criteria are tighter than those for signature strikes, requiring evidence of a threat to the United States, and they have even given them a new name — TADS, for Terrorist Attack Disruption Strikes. But the details are a closely guarded secret — part of a pattern for a president who came into office promising transparency.

How exactly is one supposed to know we aren't just killing random people for no reason? I would say that there has to be some kind of oversight for this kind of thing to have a prayer of success. Not the press, necessarily, but perhaps a secret court, something like that. Someone not directly reporting to the President. Sullivan agrees, sort of:


Which is why this program needs to be very carefully monitored, excruciatingly reviewed, constantly questioned. So yes, I'm with Conor on the need for more accountability and transparency on this.


The awful truth of war is that innocents will die. Our goal must be to minimize that. Compared with the alternatives, drones kill fewer innocents.

Sullivan's position, as best I can make out, is that the drone program is troubling but necessary. We should have more oversight if possible, but on balance it's a good thing. Let me first agree very strongly with his contention that drones are preferable by far to ground invasions. But this is a false dichotomy. The choice shouldn't be drones vs. war, it should be effective vs. ineffective action. It looks to me that even if we give the administration the benefit of the doubt, there are not the structures in place that will ensure success in the long term.

I simply do not trust the security apparatus of this country any longer. Bush was eight long years of catastrophic failures, each one tripping over the last, and Obama looks decent only by comparison. Far worse, elite lawbreaking is no longer punished. The lesson of history is that unaccountable elites will abuse their power if they get half a chance. Nearly the entire top echelon of the last administration are war criminals, yet walk free. Several have boasted about their war crimes on television. Worst of all, the population doesn't seem to much care about or want to grapple with this fact.

Clearly we're pretty good at killing people, and we seem to be keeping a lid on Al Qaeda for the time being. But hundreds of civilians are also dying, and in a particularly brutal and dishonest way. John Brennan has lied over and over to cover up this fact. In my honest estimation, the next 9/11 just waits for us to lose interest, or the rot to spread so far among top officials that even with random carpet bombings, they can no longer actually hit their targets.

UPDATE: On further reading, clarified the sentence about McVeigh.