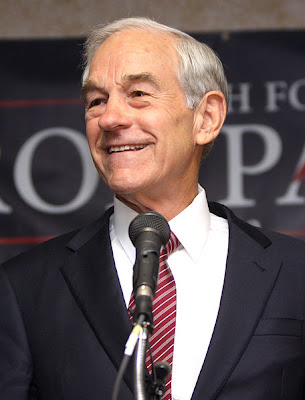 There's been some smoke in the lefty blogosphere over Ron Paul recently. Glenn Greenwald argued that, despite his many flaws (abjectly racist newsletters published under his name, for example), Paul is a valuable presence:


But the point that she’s making is important, if not too subtle for the with-us-or-against-us ethos that dominates the protracted presidential campaign: even though I don’t support him for President, Ron Paul is the only major candidate from either party advocating crucial views on vital issues that need to be heard, and so his candidacy generates important benefits.


If you want to advance the cause of a less interventionist foreign policy, you need to find a way to persuade the American public to agree with you. Ron Paul doesn't do that. He's never done that. He's such a stone libertarian that he literally doesn't know the language to do it. Because of this, giving him a bigger spotlight does little for the cause of a saner foreign policy. At the same time, it does plenty for less sanity everywhere else because you don't get to control where the spotlight falls. Politics may make for strange bedfellows, but there are limits. There are some allies that aren't worth having.

That's a debate we can have, and though I think I lean more toward Greenwald's position, given that the media doesn't show much inclination for putting Paul in the crank box and we have no progressive anti-imperial champion (the real tragedy), but I can see the logic of Kevin's position.

On the other hand, we've got Matt Stoller, who's cooked up a bizarre theory (one, two) about how Ron Paul gives liberals fits:


The basic thesis was that the same financing structures that are used to finance mass industrial warfare were used to create a liberal national economy and social safety. Liberals supported national mobilization in favor of warfare and the social safety net during the New Deal and World War II (and before that, during the Civil War and WWI), but splintered when confronted with a wars like Vietnam, Iraq, and Afghanistan. The corruption of the financial channels and the destruction of the social safety net now challenges this 20th century conception of liberalism at its core (which is heavily related to the end of cheap oil). Ron Paul has knitted together a coalition of those who dislike war financing, which includes a host of unsavory and extremist figures who dislike icons such as Abraham Lincoln and FDR for their own reasons. But Paul, by criticizing American empire explicitly and its financing channels in the form of the Federal Reserve, also enrages liberals by forcing them to acknowledge that their political economy no longer produces liberal ends.

The reasoning seems to go something like this (hat tip to Matt Yglesias, who helped me with the scheme):


1) Modern states use financial innovation, like fiat money and central banking, to do things.
2) Some of those things are good (WWII, Social Security), while others (Vietnam, Iraq) are bad.
3) Ron Paul thinks all those are bad and wants to destroy the capacity of the state to do things.
4) ???
5) Liberals hate Ron Paul because he's forcing them to confront the failure of their "political economy."

No, it doesn't make any sense. It's fair to say that most liberals would like the state to do things, like provide a safety net, police, and Medicare, which means it must have the capacity to do things. Therefore Ron Paul is a lousy candidate for a liberal (plus about three dozen other self-sufficient reasons). The liberal "political economy" still works, we've still got Social Security, Medicare, and food stamps. It's not like countries that don't invade random countries for no reason, and provide a decent life for their citizens (i.e., Sweden) got there by abandoning paper money and central banks. I think Digby's instincts serve her well in just tossing Stoller's faux-intellectual mess of pottage aside and reiterating basic progressive common sense:


...I will simply say that I define my own liberalism as a belief in egalitarianism, universal human rights, individual liberty and social justice, all tempered by a pragmatic skepticism of all forms of power, private as well as governmental. I prefer democracy because it provides the best possibility of delivering on those desires while keeping authoritarian power at bay even though it's ridiculously inefficient and often corrupt.

Amen. It's especially noteworthy how Stoller openly flirts with goldbuggery in his first post:


What connects all three of these Presidents is one thing – big ass wars, and specifically, war financing. If you think today’s deficits are bad, well, Abraham Lincoln financed the Civil War pretty much entirely by money printing and debt creation, taking America off the gold standard. He oversaw the founding of the nation’s first national financial regulator, the Office of the Comptroller of the Currency, which chartered national banks and forced them to hold government debt to back currency they issued. The dollar then became the national currency, and Lincoln didn’t even back those dollars by gold (and gold is written into the Constitution).

Big time economists like Paul Krugman and John Kay (not to mention Yves Smith) have been strongly criticizing the foundations of economics. There may be a economics revolution in the offing. But there are still some ideas out there that are definitely nuts, and the gold standard is one of them. If an idea leads you anywhere close to Ron Paul's economics ideas, it's a good sign you're in dangerous territory.