The Iraq that could have been 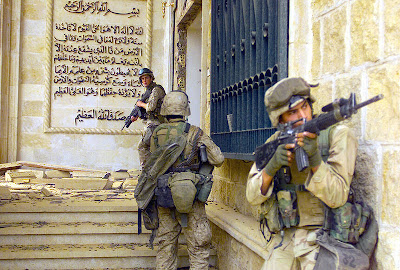 One of the things that most depresses me now about the Iraq War was that, regardless of how things turn out in the future, it seems pretty likely that Saddam would have been toppled by some kind of home-grown revolt in the Arab Spring; or if that didn't work, then we could have given the rebel movement the kind of support that seems to have worked in Libya.

I was against the Libyan intervention for two big reasons. First, I was afraid that we'd get sucked into another ground war in a Middle Eastern country (see the "regime change ratchet"). Second, there was no authorization from Congress, and pretty much no debate beforehand. The President seems to have, now, an almost completely free hand in foreign affairs, and I think that sets dangerous precedents. For reasons laid out in The Origins of Political Order, dictatorships tend to fail because they have trouble surviving crappy leaders. As it turns out, Obama is a straight killing machine who is too cunning to get sucked into that kind of morass, but there's no guarantee that the next guy will be so ruthlessly effective. In fact, it's a given there will be a lunatic sooner or later with the GOP the way it is. In any case, I'm glad that, in this particular instance, it wasn't a complete disaster for everyone involved.

Moreover, though it was probably mostly luck, the actual support methods we used in Libya seemed to work fairly well. Obviously Libya is still in a precarious position, and it would not surprise me at all if it collapsed into civil war, and I think the smart money is on it remaining a corrupt petro-state for the foreseeable future. But as far as the actual tactics we used to support the rebels, I have to say I was surprised at their effectiveness.

Indulge me in a quick historical counterfactual. So it's 2002, and the Iraq vote fails narrowly in the Senate. Big controversy, but ultimately the war isn't started. Saddam hangs on throughout the Aughts, but he's broke and inspectors keep him from developing nerve gas or other biological weapons. Fast forward to 2010, and revolution is sweeping the Middle East. Saddam is already one of the most weak and isolated dictators in the region, and galloping rebellion breaks out in Iraq with broad Shia support, but based in Kurdistan. Fighting is intense, but with Saddam's large stock of conventional weapons a stalemate looks imminent. Now Obama (lets say with the support of Congress) and the UK, and with somewhat reluctant support from France and the rest of Europe, push through a UN resolution authorizing military intervention. We support the rebels with strategic bombing and supplies, and ultimately the tide is turned in about a month. It turns out that casualties are about 50,000 on both sides.

After a quick power struggle, an interim government emerges. They secure the streets, more or less. They don't dismiss the army. They get oil pumping and set a date for elections. Sanctions are lifted. Chinese and Russian investment money pours in. A government is elected. They're moderate Islamists, corrupt, somewhat brutal, but things look quite a bit better than they did under Saddam. Sunnis howl at their loss of power, but stay put for the time being. Iraq remains a bit of a basketcase.

But Iraq's sizable middle class remains. Fifty thousand is a lot less than 650,000. The war, and the political struggle to determine who is going to take power, is over quick. There is no years-long grinding insurgency. Economic growth, based mainly around oil but way better than a total collapse, returns. There aren't 4.7 million refugees. For a time, the US is stupendously popular in Iraq, and though that quickly fades, our reputation in the Islamic world is considerably improved for much longer.

Man, George Bush really was an idiot for the ages.

Again, I think the long-term trend toward total lack of restraint on the executive branch when it comes to war is extremely troubling. I'm just thinking, given that lousy premise, what could have been.